The Alpujarra region lies across Granada and Almería’s hinterland, with small white mountain villages clinging to the southern slopes of the Sierra Nevada. Take a tour of three villages where time stands still and nature is a balm for the soul.

It is enchantingly quiet at the top of the small village of Capileira, where we stand and take in the spectacular views of valleys and gorges running down to the Mediterranean and the snow-capped peaks of the Sierra Nevada. The only sound we’re able to make out is the sound of goats’ bells in the distant mountains and the soft rush of the wind here, 1436 meters above sea level, in the Alpujarra region, which clings to the southern slopes of the Sierra Nevada, midway between Granada and Almería.

The Alpujarra is made up of 25 small villages scattered like little white dots at different altitudes, protected by valleys and gorges. It’s early Saturday morning and my traveling companion, photographer, and I, along with my guide, José, are visiting the three most famous villages, Capileira, Bubión and Pampaneira, which lie like pearls on a string in the Poqueira Valley. We start in the highest placed town, Capileira, where we get the most beautiful view of the underlying towns.

– The Alpujarra is known throughout Spain for its unique microecology with agricultural land shaped like terraces. The green farmland, watered by the Sierra Nevada thaws, contrasts sharply with the dry canyons below, which are perfect for hiking. There are also many people who ride horses and bicycles in the Alpujarra, as well as go on mushroom tours, José says. 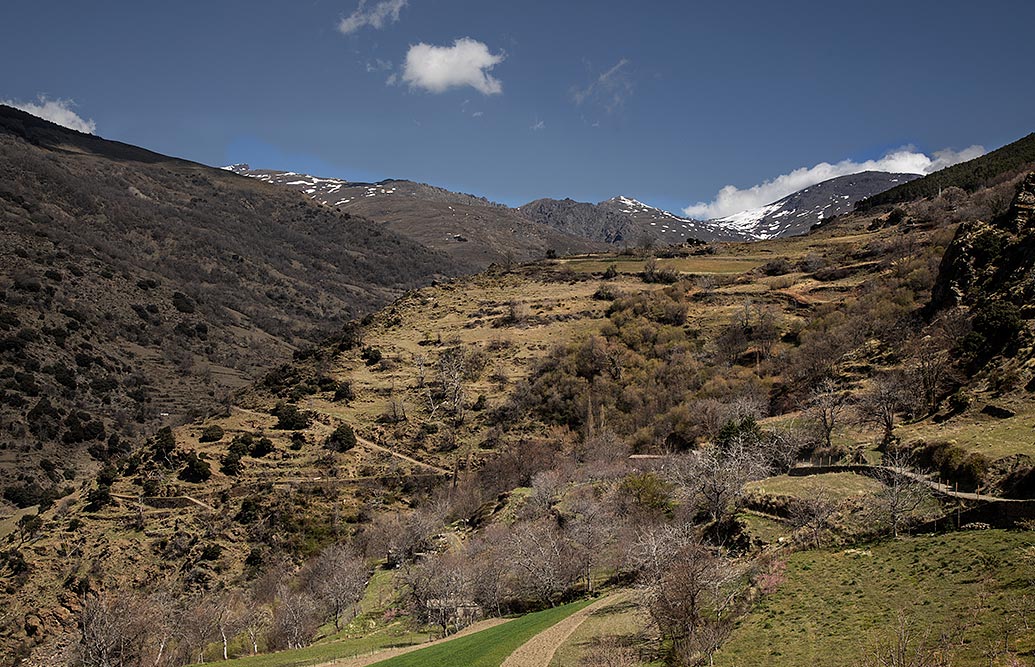 In the distance we can spot some small dots moving. It’s one of today’s groups of hikers moving along the gorge’s many trails leading up to the Sierra Nevada peaks.

José looks after them attentively. Even at a distance, he notes every step of every walker.
– I hike here almost every day, with both beginners and very experienced hikers. I also walk to work every day from one of the low-lying towns where I live says José.

Today he’ll have to settle for watching because we’re not going to be hiking in the wild here on the edge of the Sierra Nevada National Park. Our walk only brings us around the city streets, but here too it will prove that José’s trained hiking feet are an advantage to him. 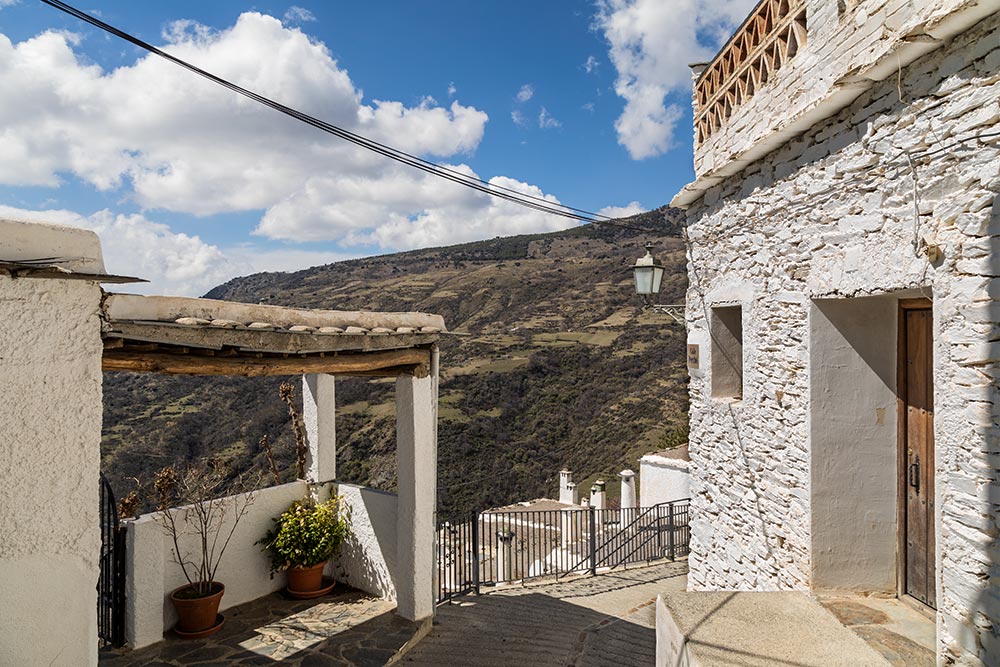 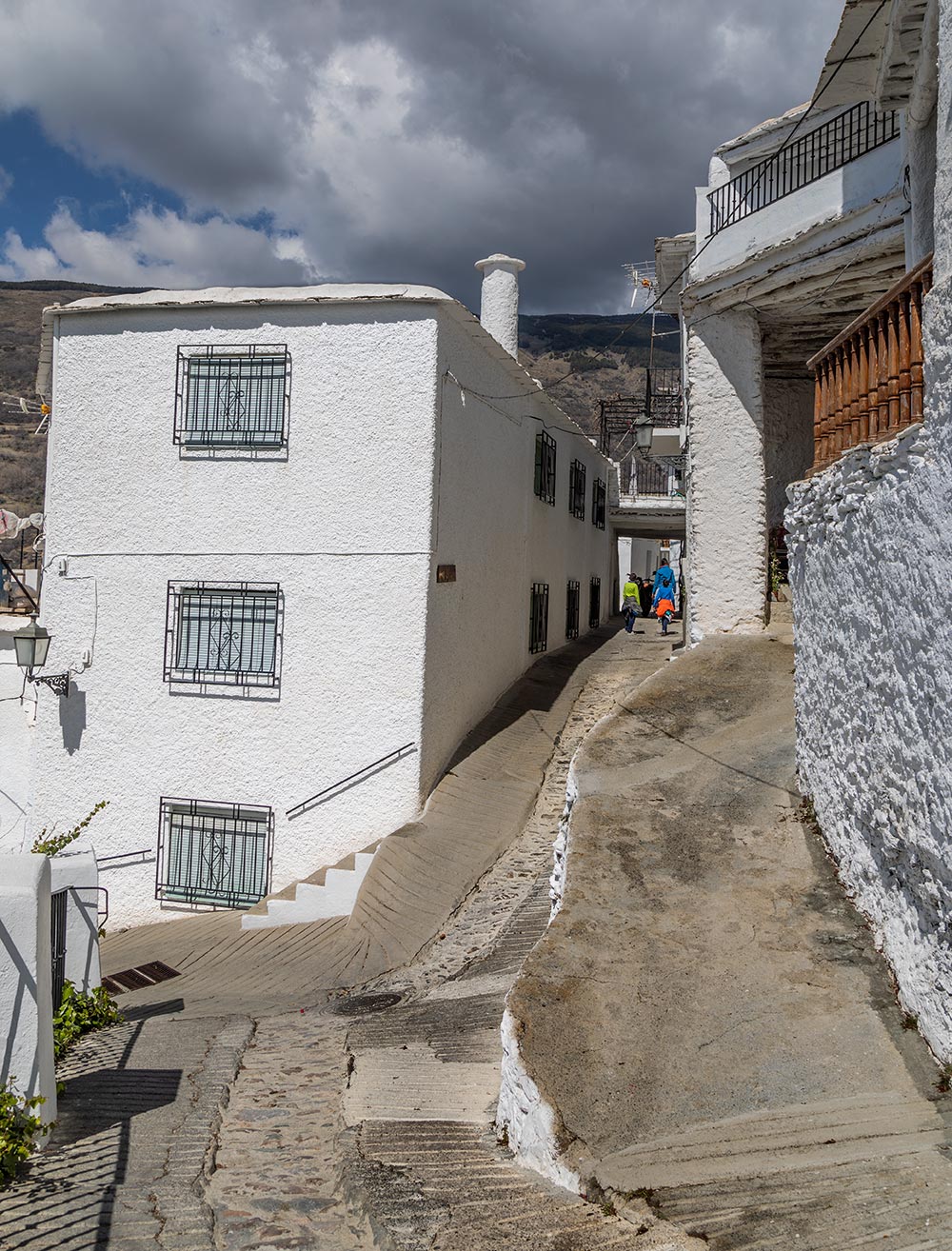 Capileira and the other villages are over 1000 years old. The whitewashed houses with flat clay roofs and characteristic chimneys reflect the villages’ Moorish past. After the Christian reconquest of Andalusia in 1492, the Muslims were forced to convert to Christianity. The Muslims who wouldn’t convert fled to the mountains and settled in this remote area. Later, they were driven out and Christians settled, but the villages have retained their characteristic Berber architecture, says José.

We climb the crooked, steep, cobbled streets. Some of the streets are so crooked and unlevelled that it takes a lot of concentration for the photographer and me not to trip or twist our feet when our hungry eyes want to enjoy it all at the same time as we want to talk to José.

– Look how precisely, easily, and securely José sets his feet each time he takes a step, my photographer says with thinly disguised envy as our feet shuffle through the streets, struggling to keep their balance. He really is a top trained hiker.

– Notice how some of the houses are connected by tinaos. These are the structures that connect houses on either side of the street like a gate, José interrupts. 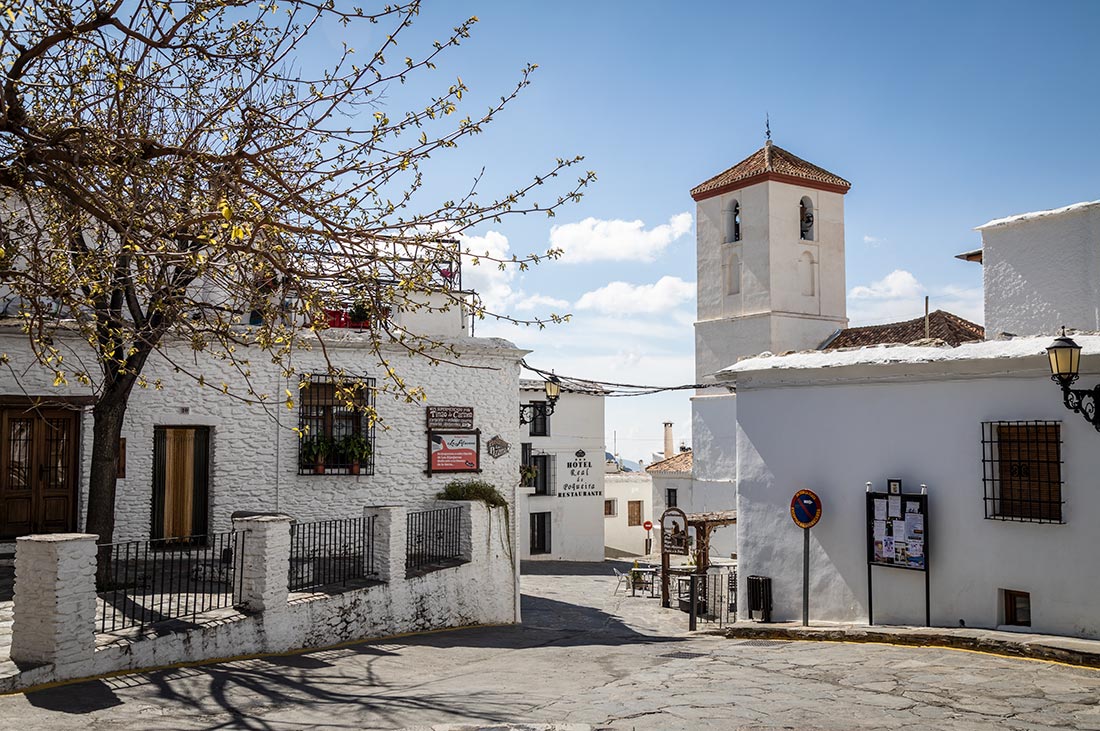 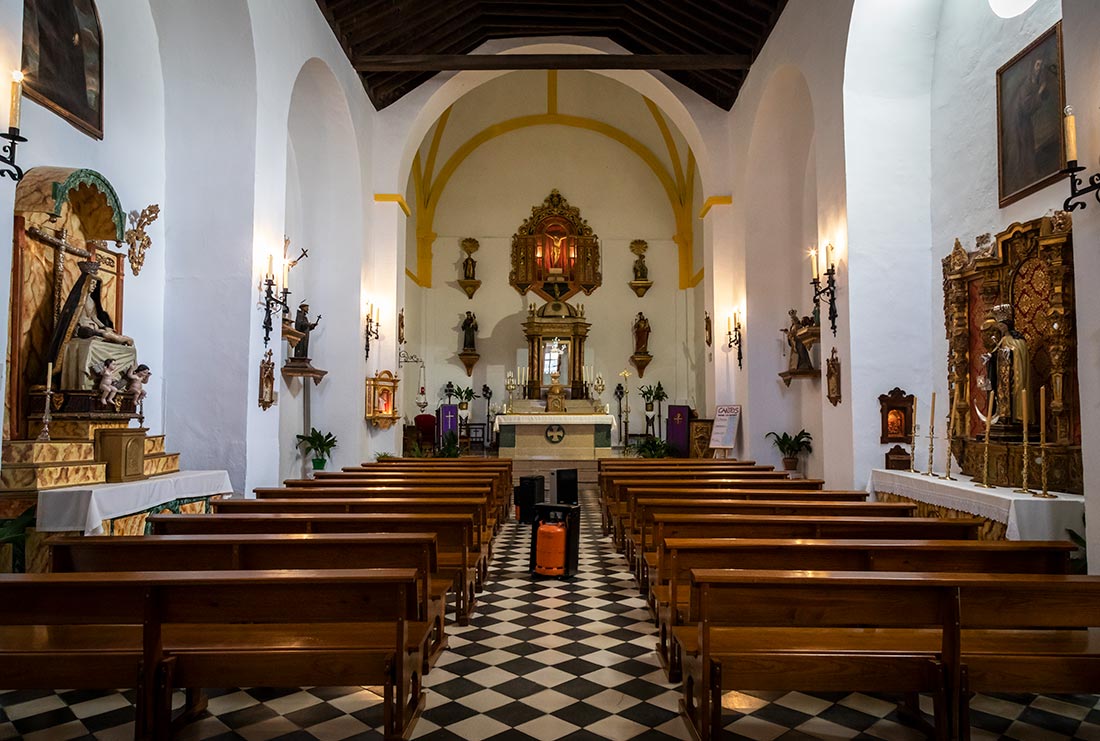 In Capileira’s center, we look inside the village church of Santa Maria Maggiore, whose slender bell tower looms over the small town.

– The church was built in the 18th century, on top of an early 16th-century church built by the Christian monarchs on the site of a former mosque. The church has a nice Baroque altarpiece, José says. 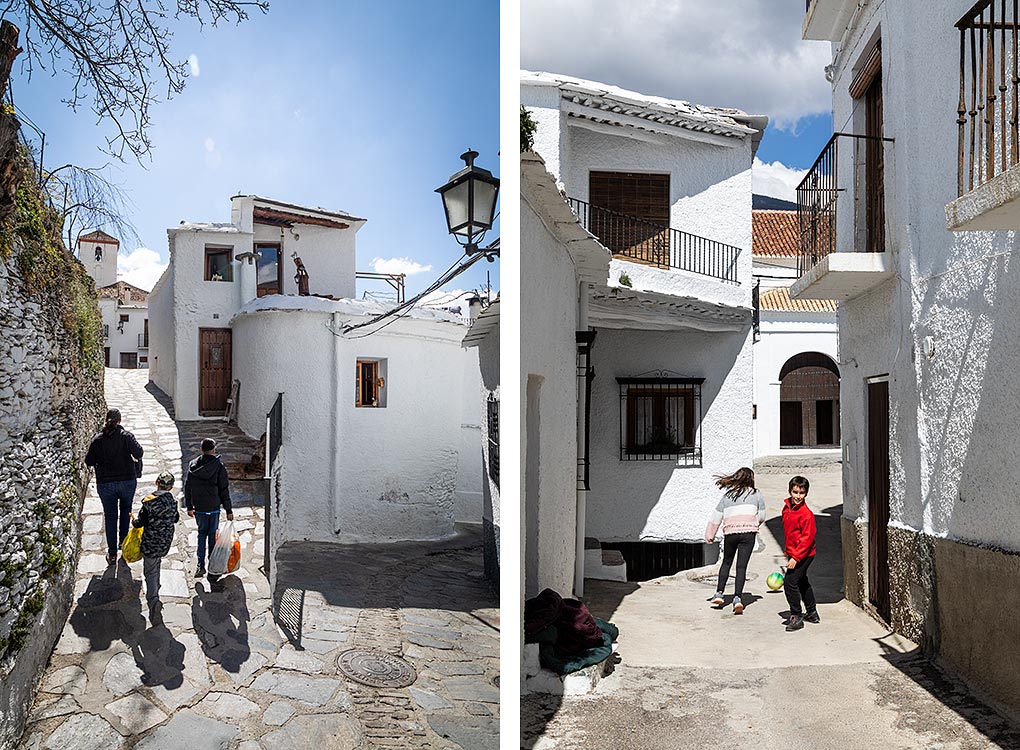 It is striking how few people we meet in Capileira, even in the center the bars and streets are empty. This is mainly because we are visiting outside the tourist season, but also because the town only has a mere 600 inhabitants. However, we meet a few in the morning, when the city slowly starts to wake. 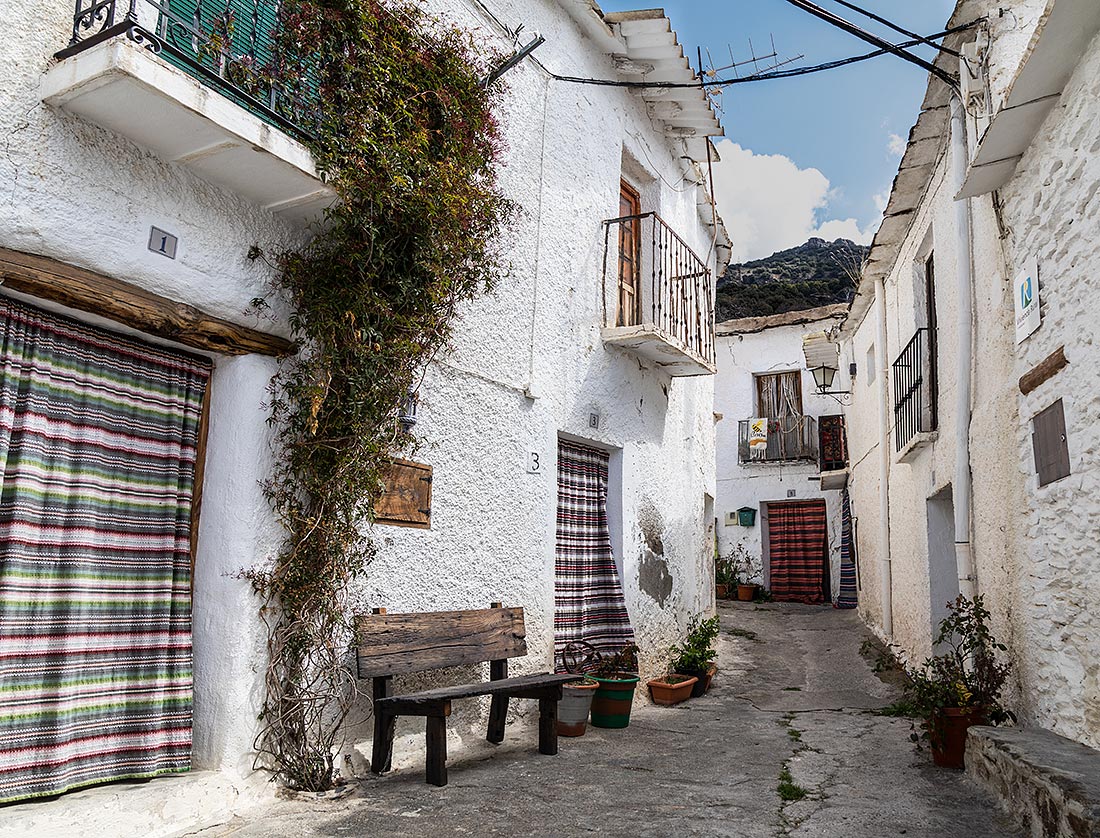 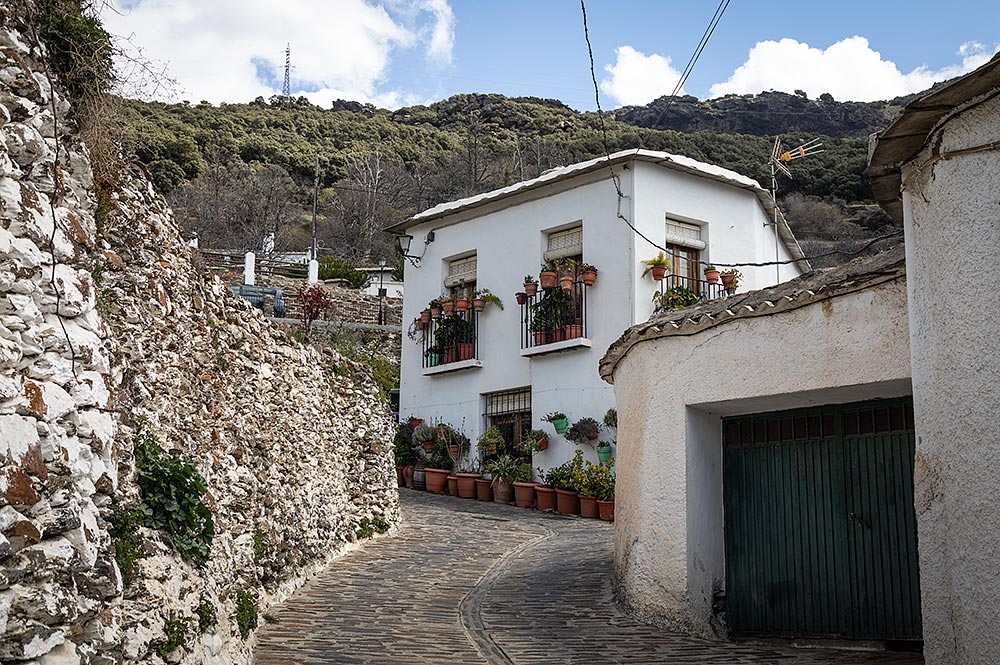 Bubión sits between Capileira and Pampaneira and is the sleepiest of the three villages. There are just 302 inhabitants here, and most stay indoors in the white houses, with their characteristic woven woolen rugs at the doors, which according to José, are one of the area’s traditional crafts kept alive by the locals. The balconies are adorned with a multitude of flowerpots with plants and flowers, and the white houses, surrounded by quarries, blend beautifully into the unspoiled countryside.

The streets of Bubíon are more well-kept than those of the town above, and it’s clear that the locals make a greater effort to look their best. We meet more cats than people in town, even the town square with the town hall and the church is completely deserted. 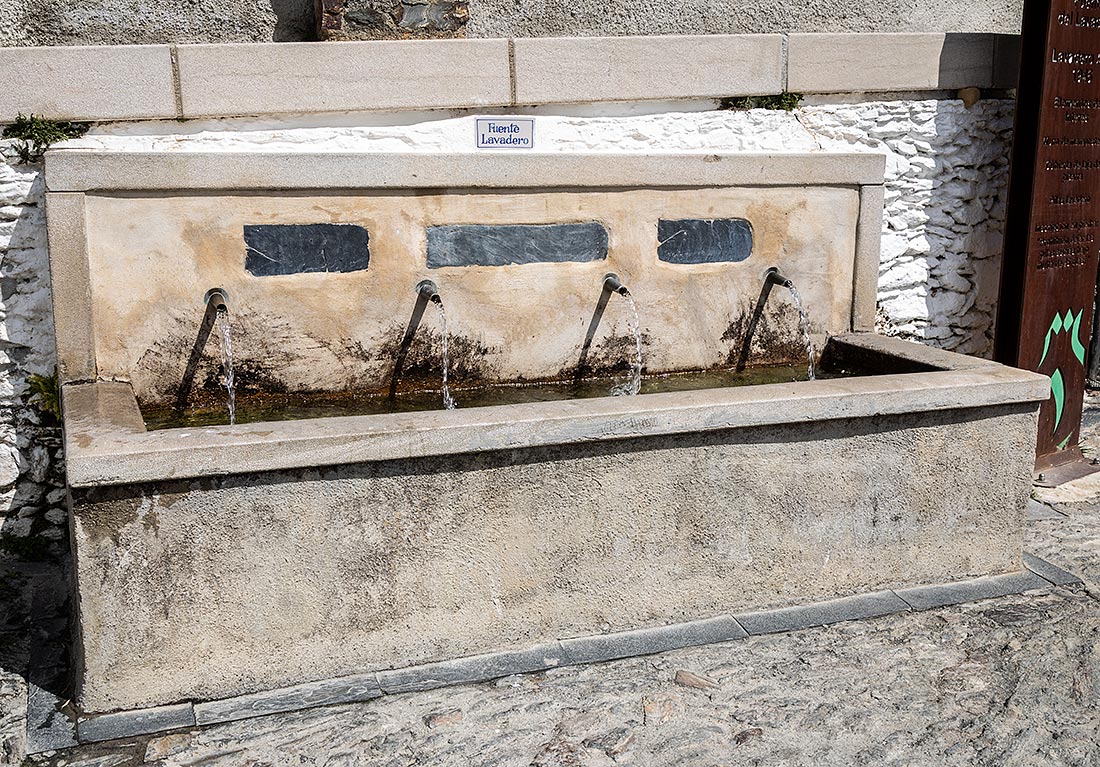 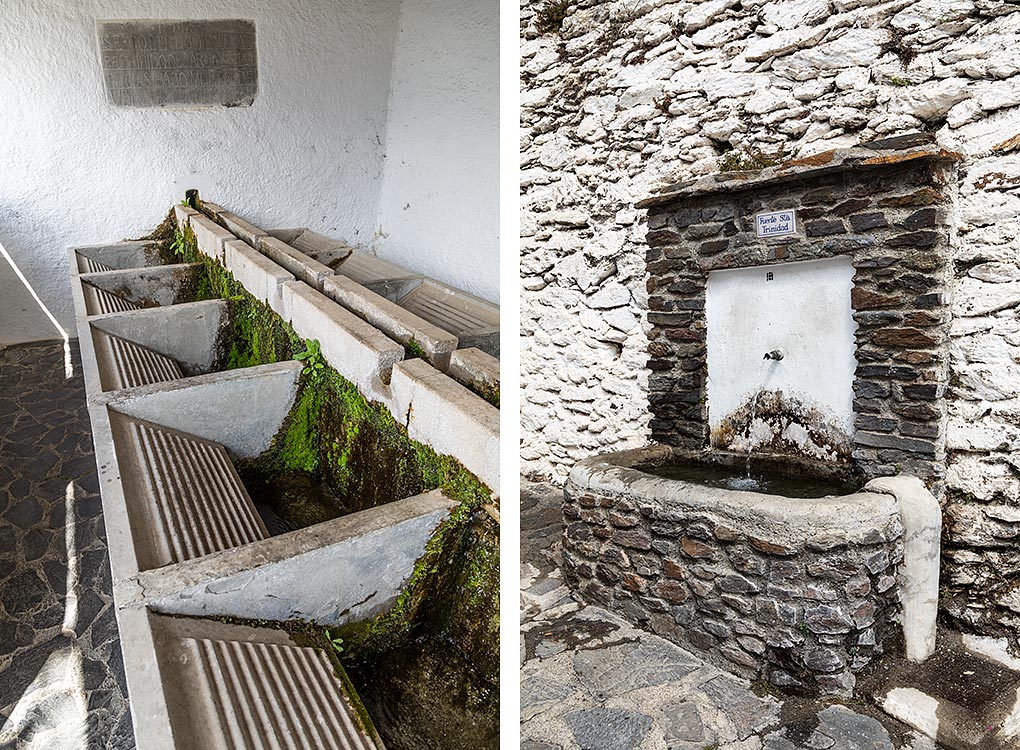 The villages and the water

Although Bubión seems rather deserted, there are several springs and fountains sprinkled around 16 locations in the city. The sound of the springs is soothing, and the tranquillity, beauty, and originality of Alpujarra make me wonder if I should just settle here and live the simple life.

– There are plenty of springs in all the villages. The water in the springs comes directly from the mountains, and villagers here have been tapping clean spring water for years, José says.

Bubión also has plenty of washing tubs with taps and washboards, which the women of the city previously would use to wash their clothes. Today, with running water in the houses, no one washes clothes in the communal washing areas or fetches water. The most you can do is quench your thirst with a sip of tap water in the hot weather. 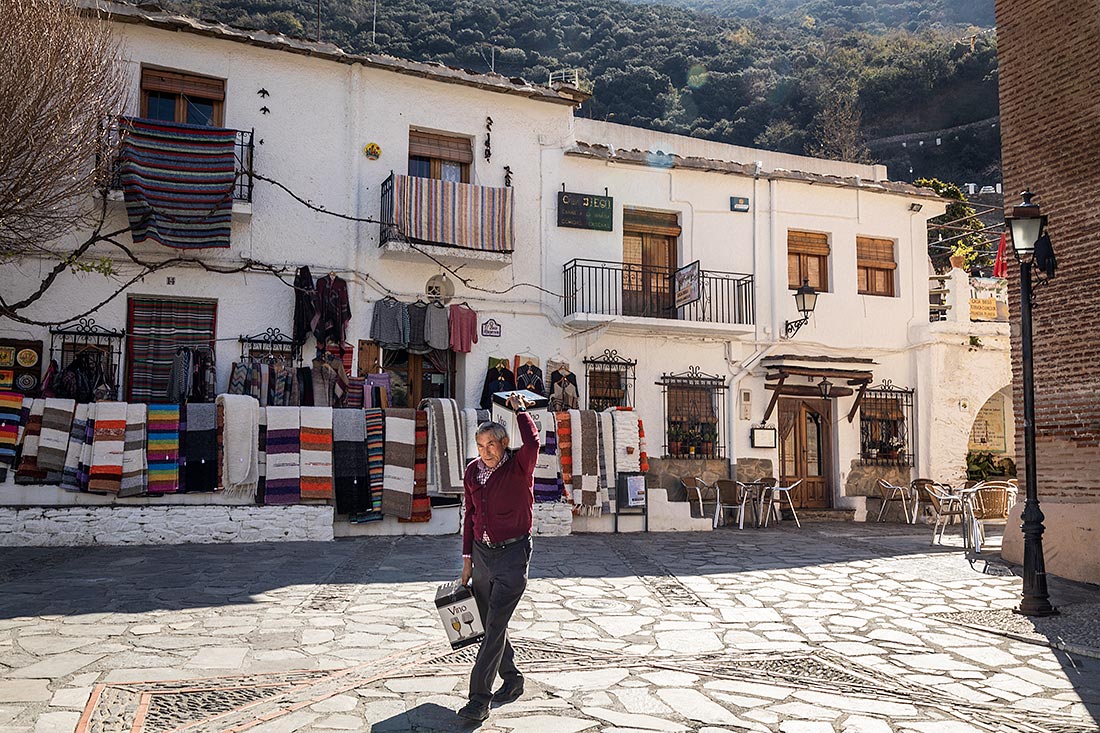 Pampaneira is full of colour and life

Our last stop, the village of Pampaneira, is significantly livelier than the other two towns. Here, produce and wine are brought to bars and cafés, where the first customers of the day have already ordered their first cups of coffee and the first beers and tapas, and a few local tourists meet their hiking guide at the town’s small tourist office.

The shop fronts are also bursting with life with the multitude of brightly colored woolen rugs that adorn them. Along the narrow main street, you can zigzag between cafés and restaurants and a host of shops selling woven rugs, woven chairs, and baskets, fabrics, and yarn. 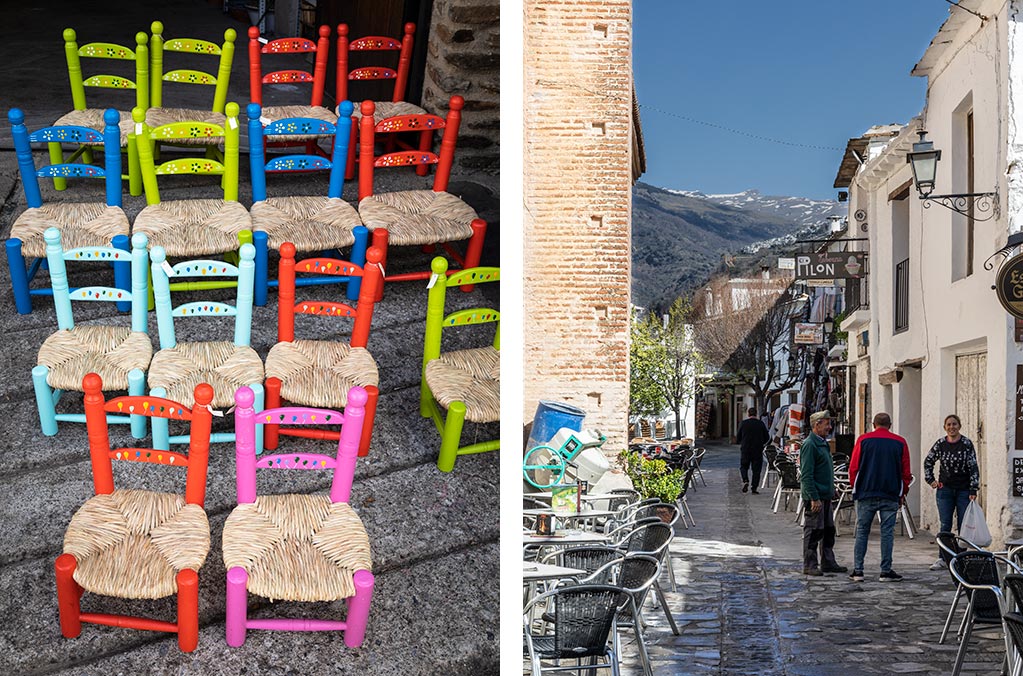 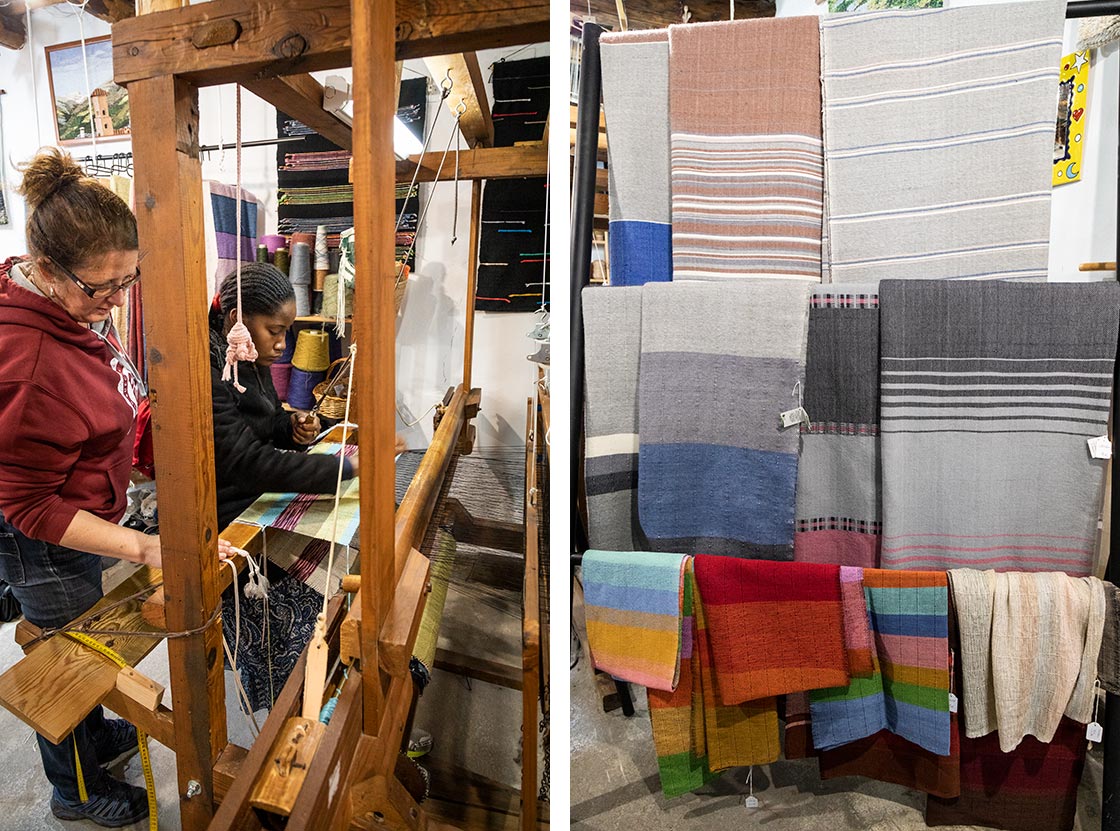 The Taller Textil – Mercedes Carrascosa weaving mill is on the town’s main street, and José thinks we should see how Alpujarra’s famous woolen rugs are made, so we pop inside.

At the large loom sits a young girl who is learning how to handle yarn and colors to make a beautiful rug. The weaving mill offers workshops to anyone interested in testing their skills in a local craft tradition. It’s usually busy, and as we have not booked an appointment at the loom, we have to make do with watching.

– The woven rugs are called jarapas, and the word covers all types of rugs. They are used both as carpets and, as you have seen, curtains to keep out the cold. They are thick and made from wool, cotton, and synthetic yarns, and the rugs’ great utility and many functions mean that the craft has survived since the 16th century, says José.

The inhabitants of Alpujarra took over the looms left by the Moors when they were expelled from the area. The Moors used the looms to make silk carpets.

José takes us further into the well-stocked chocolate shop, Abuela ili Chocolates, where we get to taste the homemade delights, where I also get tempted and buy a chocolate souvenir back home from the mountains.

After a trip to chocolate heaven, we say goodbye to José. We finish with a beer and tapas with local sausage, one of the area’s specialties, on a terrace where we can breathe in the local life.

How to get to Alpujarra

Alpujarra is located between Granada and Almería. The easiest way to get there is by car, but you can also take a bus or go on a guided day trip.

From Granada: It’s about 72 km to Pampaneira in the Alpujarra, and you’ll need to take the N-323 and then the Lanjaron. Then continue along A 4132.

From Almería: From Almeria to Pampaneira, take the A7 and A346.

From Granada: the ALSA bus company runs twice daily from Granada to Pampaneira and back. The tour lasts 2.5 hours. Check departures and prices here.

Guided day trip with stops in Capileira, Bubión, Pampaneira and Caratuñas, Pitres and Trevelez. The tour lasts 8-10 hours and costs start at 320 DKK per person. Get more information about the tour, check dates and prices, and book here (advertising link)