The wine region of a thousand colours: 6 autumn experiences in La Rioja

Spain’s smallest region is known for being shrouded in changing, beautiful colour palettes according to the season. In late autumn, when the pilgrims have gone into hibernation and most of the tourists have gone home, La Rioja is decked out in the most beautiful yellows, browns, reds, blues and greens. It’s the perfect time to explore the cultural history of La Rioja and sample the region’s food and wine. 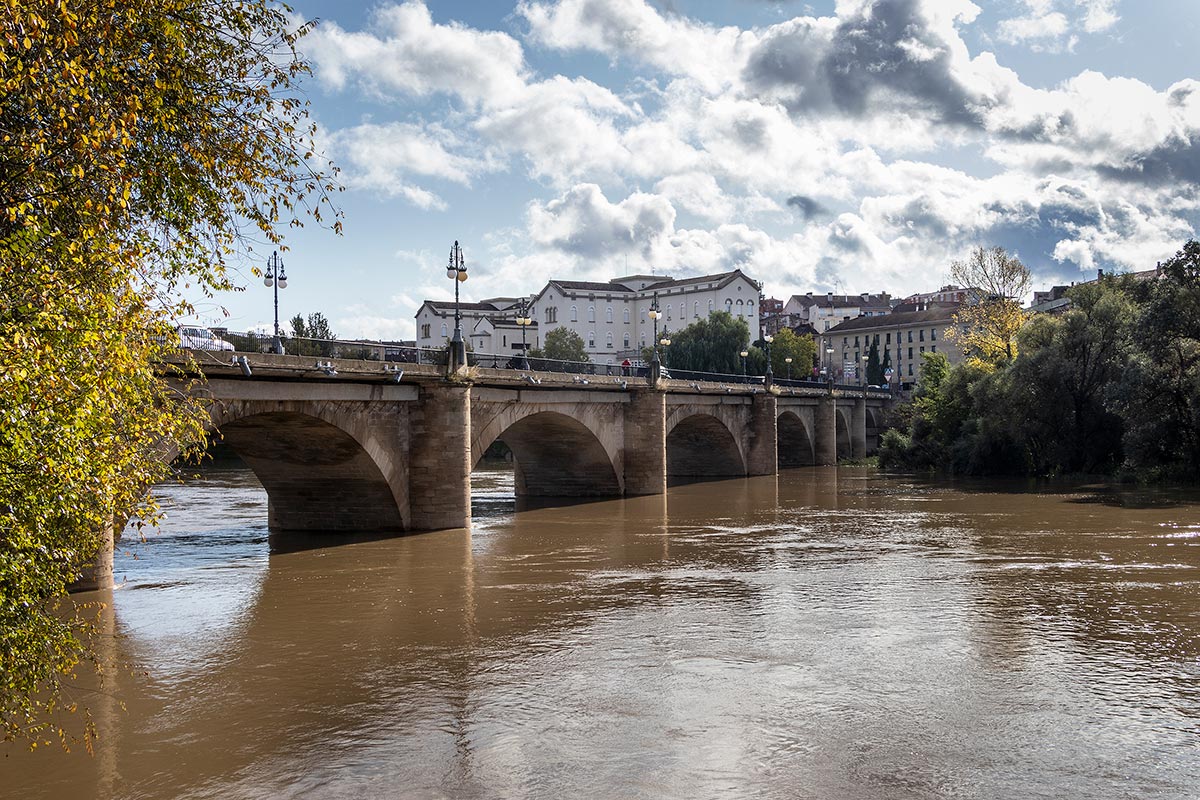 The most significant bridge in the capital of La Rioja, Longroño, is the stone Puente de Piedra, also known as the San Juan de Ortega Bridge, which crosses the River Ebro. The current structure dates from 1884 and was created after the old bridge collapsed in 1871.

When pilgrims arrive in the city on the Way of St James, it is via the Piera Bridge, which is why it is a strong symbol for pilgrims and also the city, as shown by its coat of arms. The river is beautiful around the bridge, so it’s a perfect place for a walk, surrounded by the colours of autumn leaves and watching the autumn sun glisten in the water.

There are good paths on both sides of the river, and you can walk past the town’s beautiful knowledge museum, Casa de las Ciencias, with its park. Across the street is the Ebro Park, and on the same side is the Paseo de La Florida promenade, where you’ll get great views of the bridge and nature. 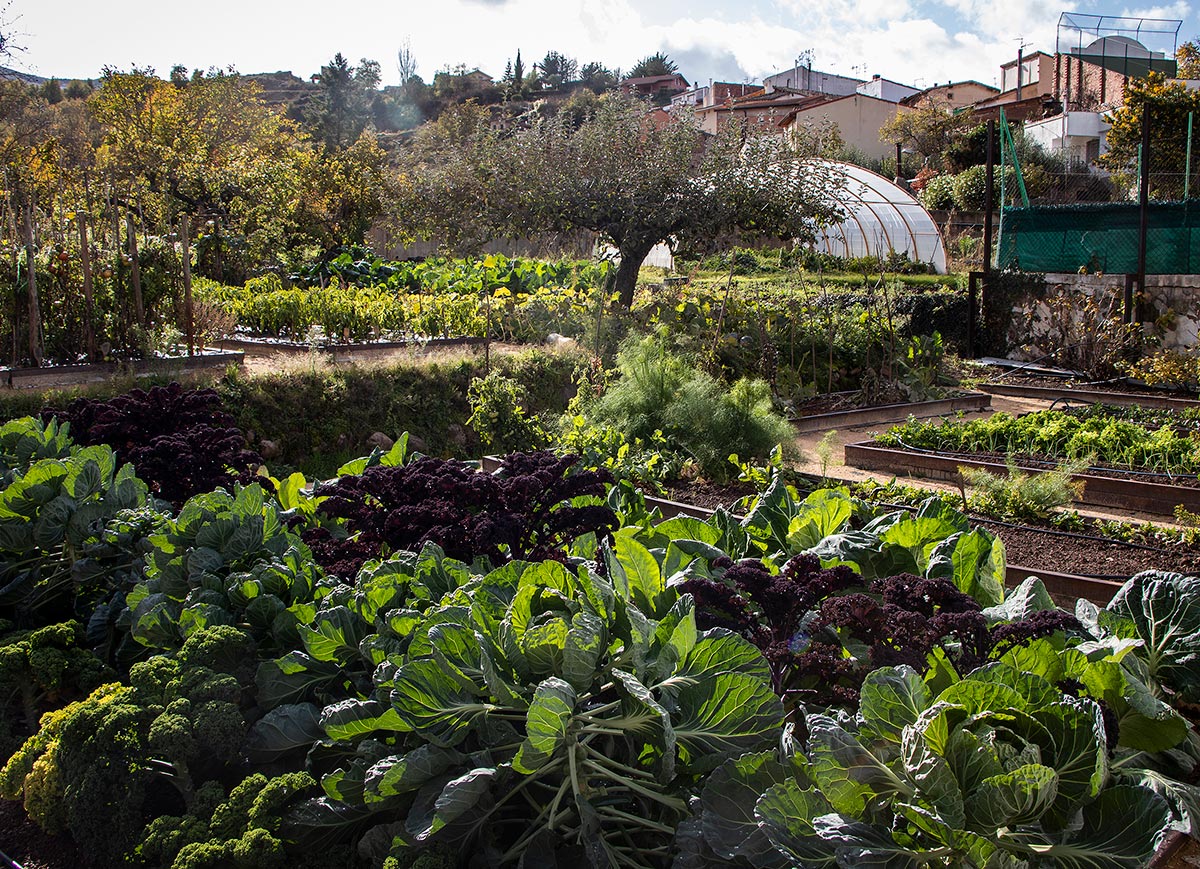 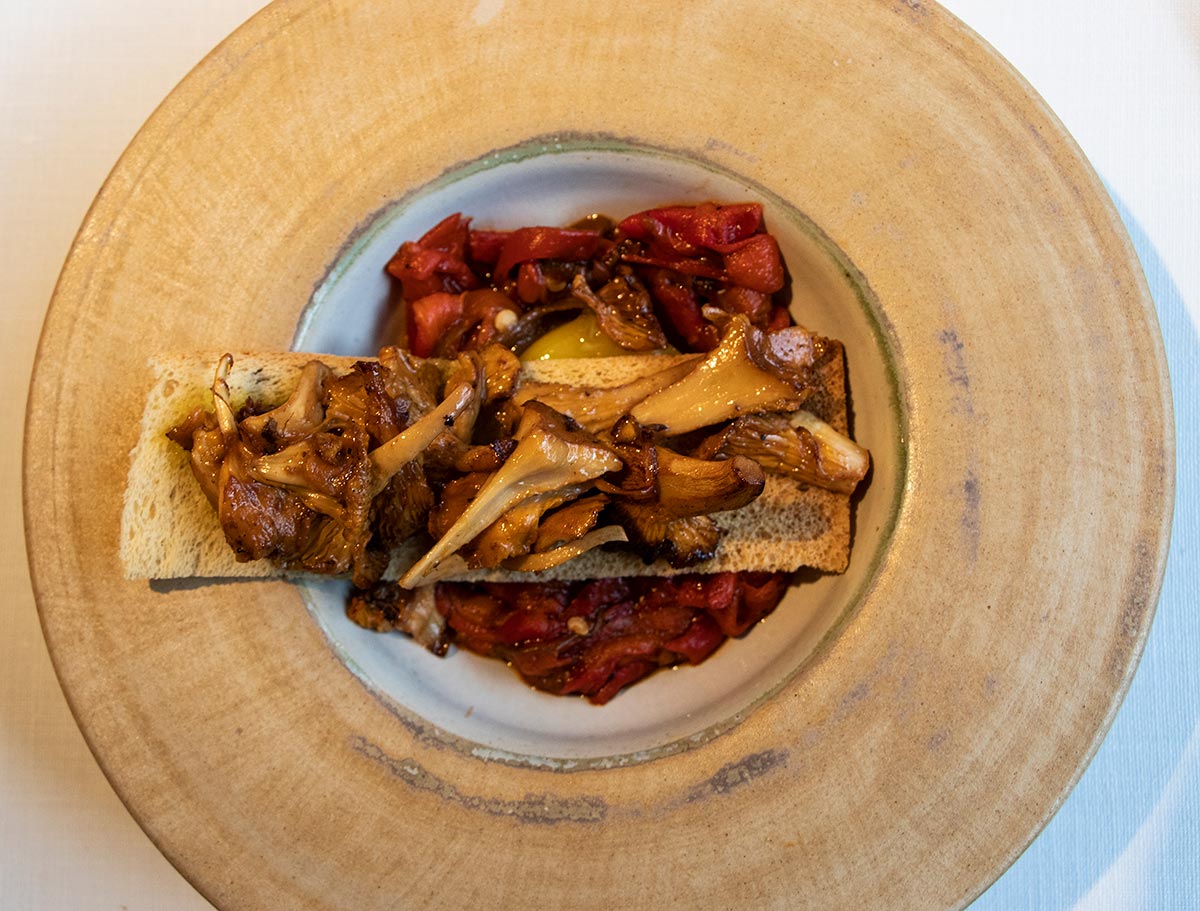 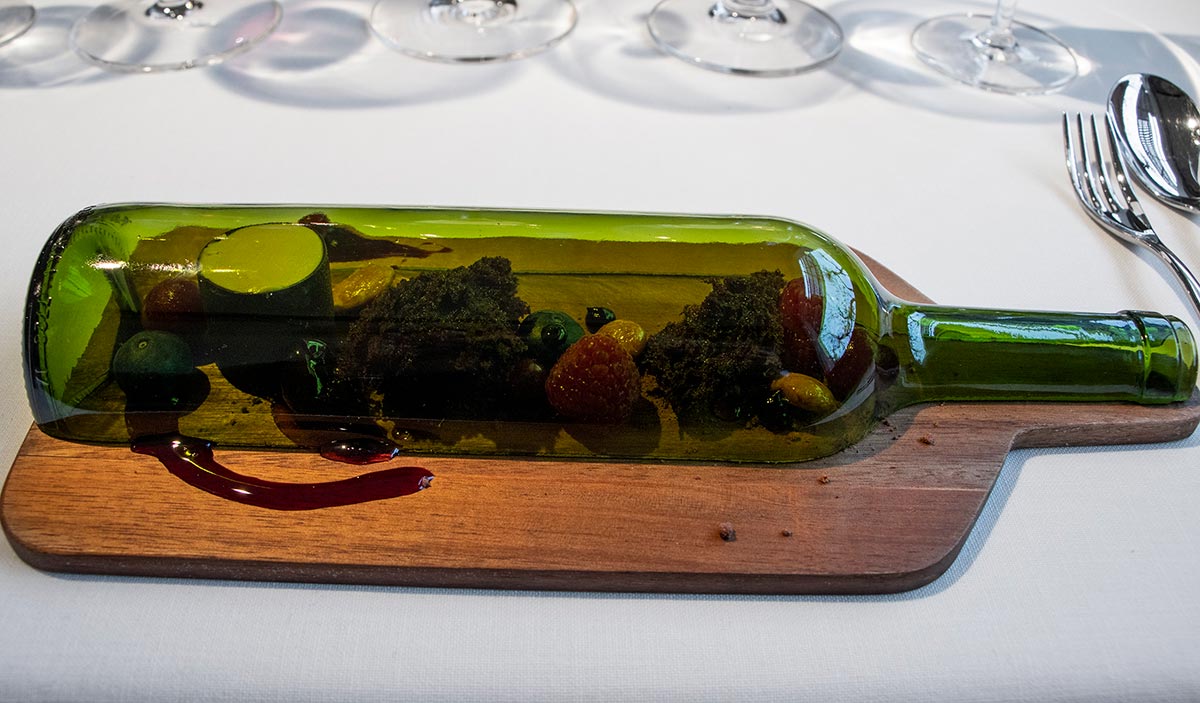 Around 20 minutes’ drive outside Logroño lies the small village of Daroca de Rioja. Despite having only 58 inhabitants, the small town boasts a Michelin-starred restaurant that is well worth the drive.

Venta Moncavillo is run by brothers Ignacio and Carlos Erchapresto, and they create stellar dishes based on vegetables from their own kitchen garden, as well as mushrooms and fruits from the area. The menu changes at the new moon and according to the season.

When I visited the restaurant one day in early November, I was served a 9-course menu that was an intense autumn experience of flavours and colours in all the northern Spanish dishes. I started my 9-course menu in the wine cellar, where I was served elaborate appetizers.

I ate the rest of the menu in the bright restaurant with panoramic windows overlooking the lush vegetable garden.
My menu included defragmented carrot served in an herb pot, baked peppers with egg and wild mushrooms, hake roasted over vine shoots and veal steak with herbs. The dessert, which consisted of berries, chocolate cake and ice cream, was served on a board, covered by half a bottle of wine. The dishes were accompanied by a wine menu, consisting of quality local wines. At Venta Moncavillo, simplicity, taste and creativity go hand in hand.

Book a table in advance. 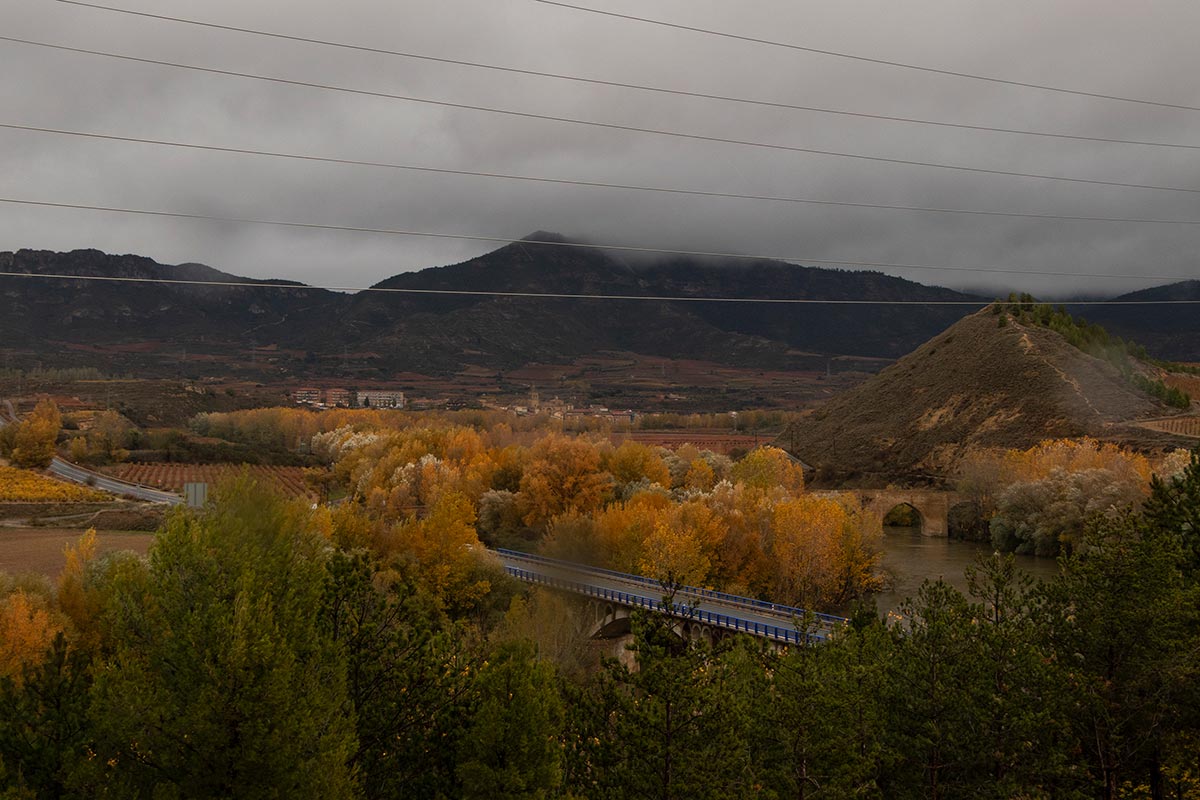 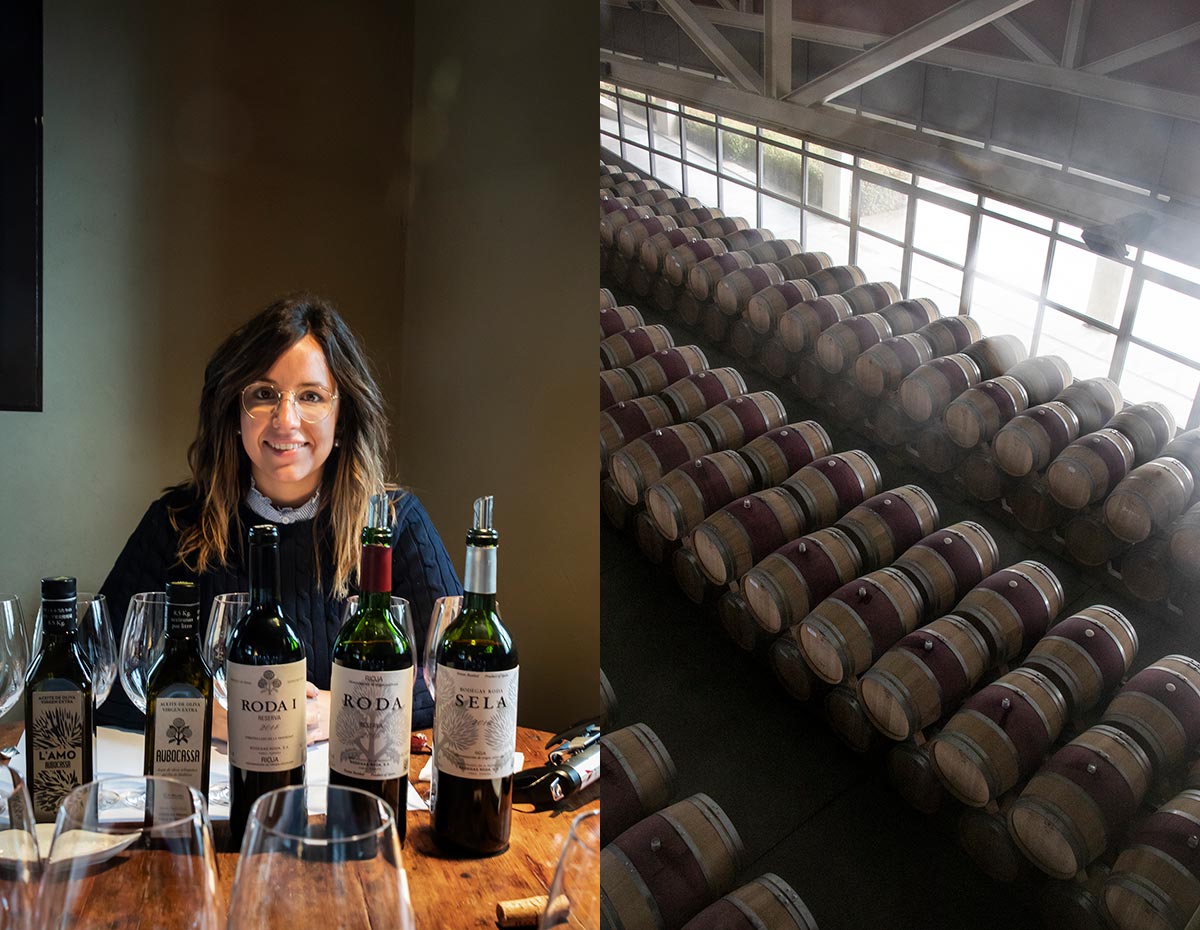 Most people associate Rioja wines with the very spicy of the kind. However, the region also produces other types of wines. This happens especially at the younger wineries, and Bodegas Rodas is one of them.

The winery was founded by the Rotllant-Daurella family in 1987 and they quickly became known for creating modern wines that bring new depths to the region’s wines. The vines are planted very close to the fields and cultivation is sustainable. This results in a very small harvest of very high quality.

A guided tour begins on the roof of Bodegas Roda, where, as well as seeing the solar panels that provide energy for both the cooling and heating systems, you’ll also get fantastic views of the city, the Briñas bridge that spans the River Ebro and the mountains in the background. In the foreground you can look out over Bodegas Roda’s vineyards. Red and black grapes of the Tempranillo, Graciana and Garnacha varieties are grown here.

The tour continues in the halls, where the wines are fermented and aged in French oak barrels. Bodegas Roda never blends new vintages with old ones to optimise the wine. Their ambition is to offer the best wine that can be produced in the vineyards in a given year.

Bodegas Roda produces four red wines, and you’ll also have the opportunity to taste three of them, as well as a couple of organic olive oils that the winery also produces. The star is the signature Roda I Reserva, made exclusively from black Tempranillo grapes and combining powerful depth and fruity freshness.

Arrange your visit with the winery in advance. You can do this via the contact details on the website.

Bodegas Roda wines are also available in Denmark. You will find them among others. here. 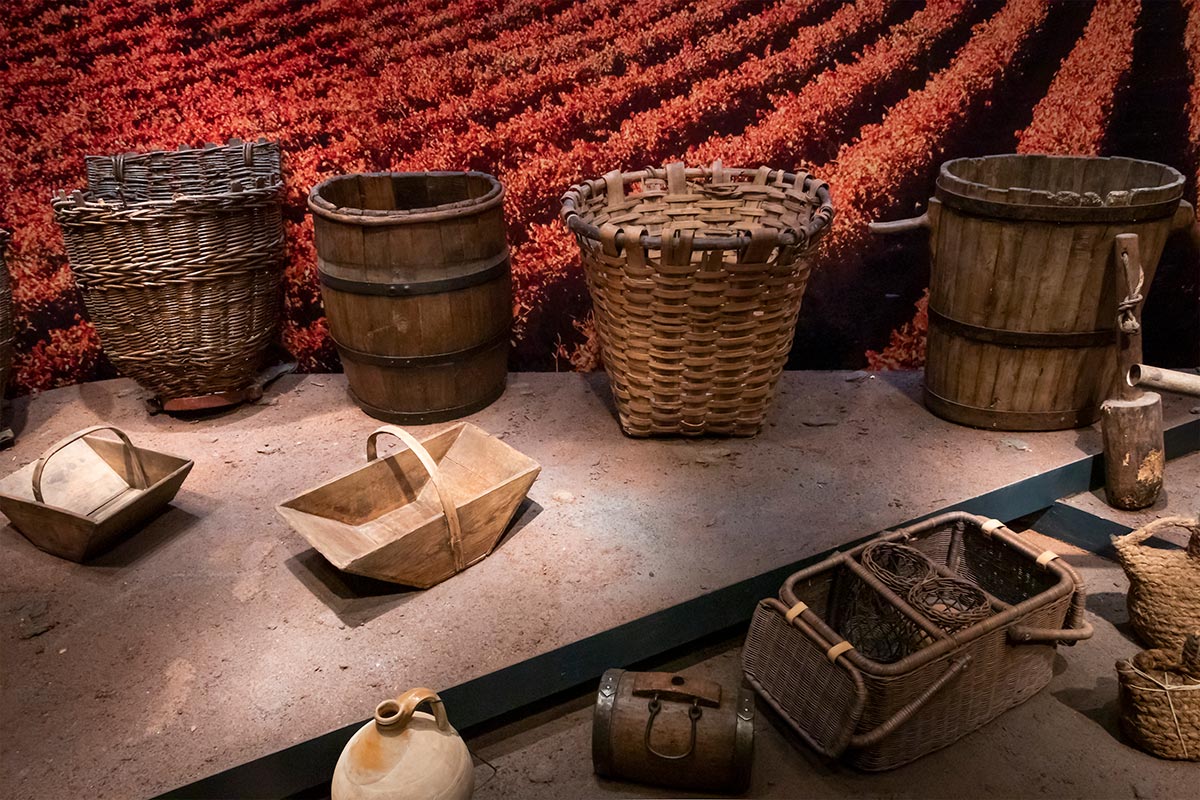 In the town of Briones, a 10-minute drive from Haro, is the Vivanco wine museum, said to be one of the best in the world, owned by the winemaking family of the same name.

Here you can explore 6,000 objects, spread over four floors, which tell the story of the difficult and fascinating process of creation in, among other things, agricultural machinery, wine presses, tools for making barrels, wine bottles and corks. There are also wine jugs, decanters, posters and glasses, as well as a gigantic collection of corkscrews.

In the interactive areas, you can, among other things, stick your nose into containers with different wine aromas, look at wine colours and study historical tools.

The exhibition’s wine-themed art collection is extensive and includes paintings by. Picasso and Andy Warhol, mosaics and sculptures. Outside you’ll find the Bacchus Garden, with more than 200 different varieties of vines from around the world, and beautiful views of the autumn hues of the vineyards and the hilltop city.

The family vineyard is on the same site and you can also have a tour of it. 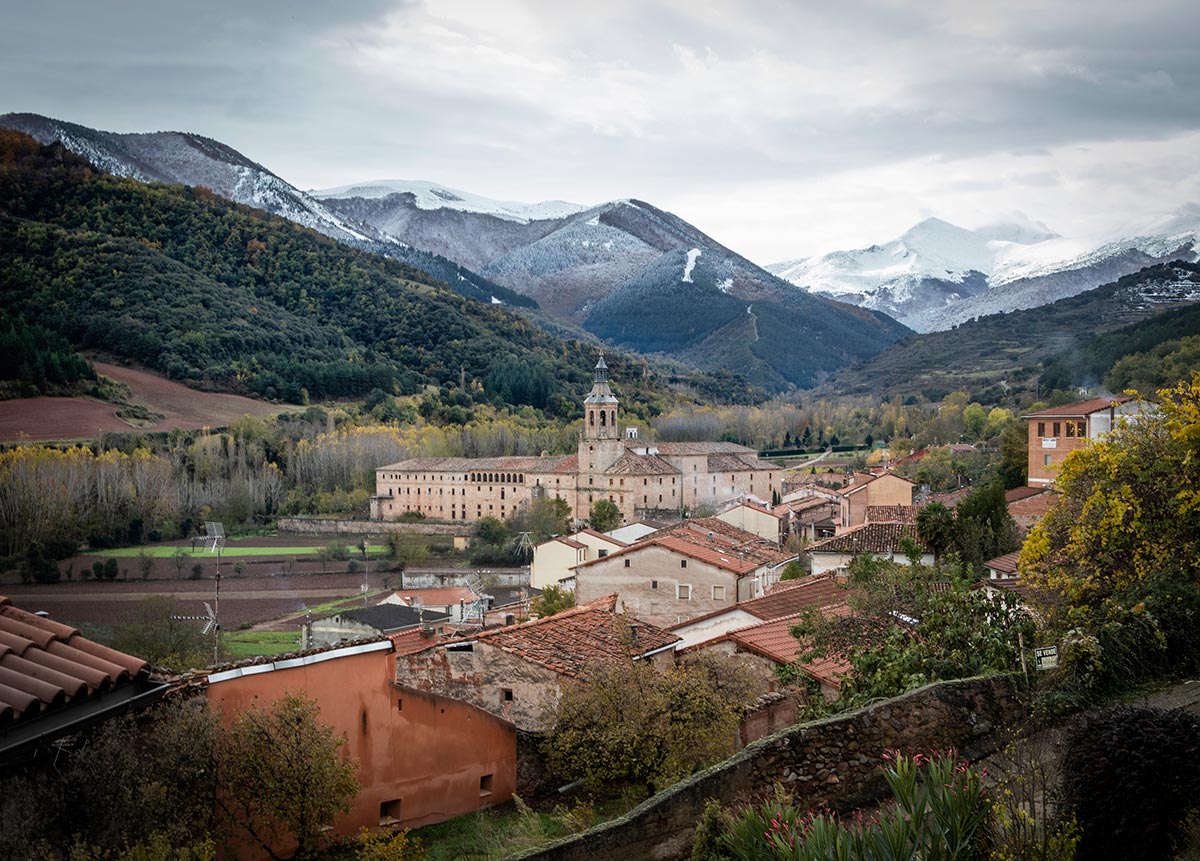 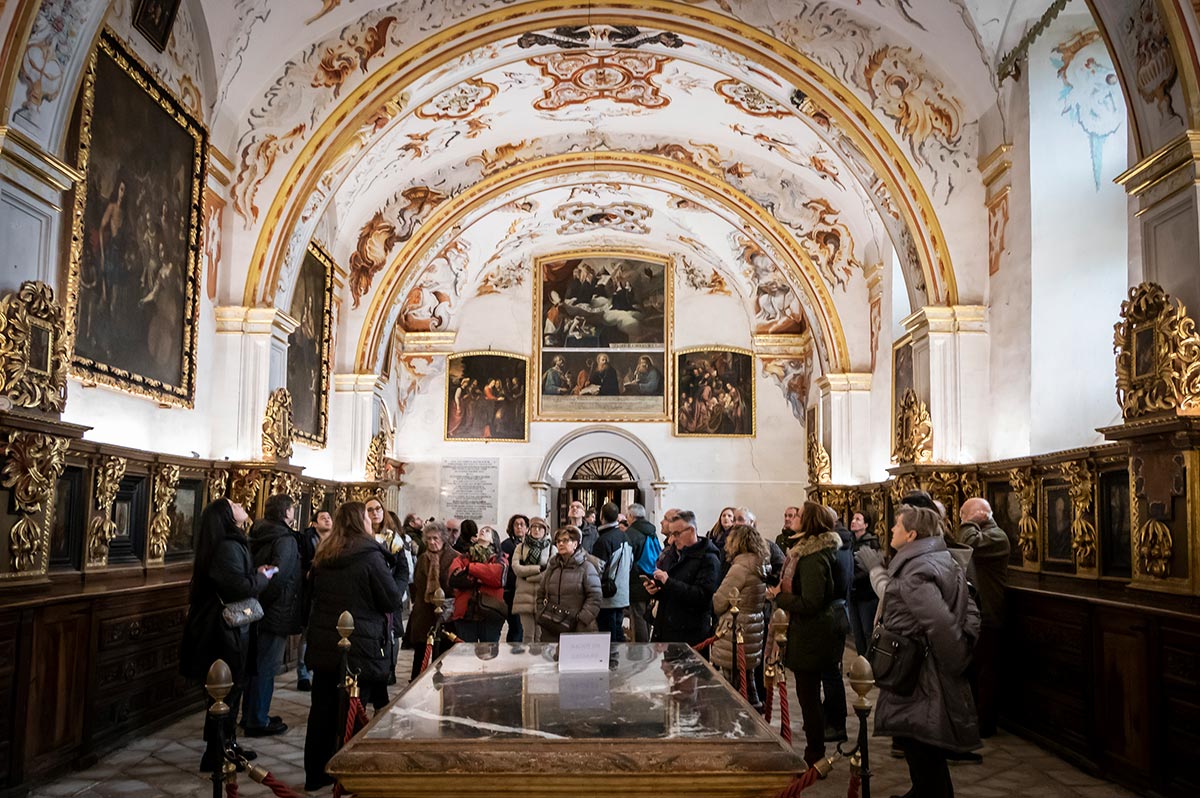 A must is the Monasterio de San Millán, which consists of two parts, Suso, the remains of the early monastery, and the more recent Yuso, and is one of the region’s most important heritage monuments.

The monastery was founded in the 6th century and was home to pilgrims. In the 11th century the community built a new monastery in the valley below the old one. Yosu, dating from the 16th century, has been rebuilt many times and is therefore a mishmash of many styles, the most prominent being Baroque and Renaissance.

The highlight of the gigantic monastery is the altarpiece by Juan Rizzi of the El Greco school, which depicts La Rioja’s patron saint San Millán on horseback and the Battle of Hacinas. San Millán’s relics are kept in a gold and ivory jar in the church. The story goes that the relics were to be transported to another monastery, but the oxen pulling the cart stopped here in the valley and refused to go any further. The 17th-century sacristy has fine original frescoes on the ceiling. 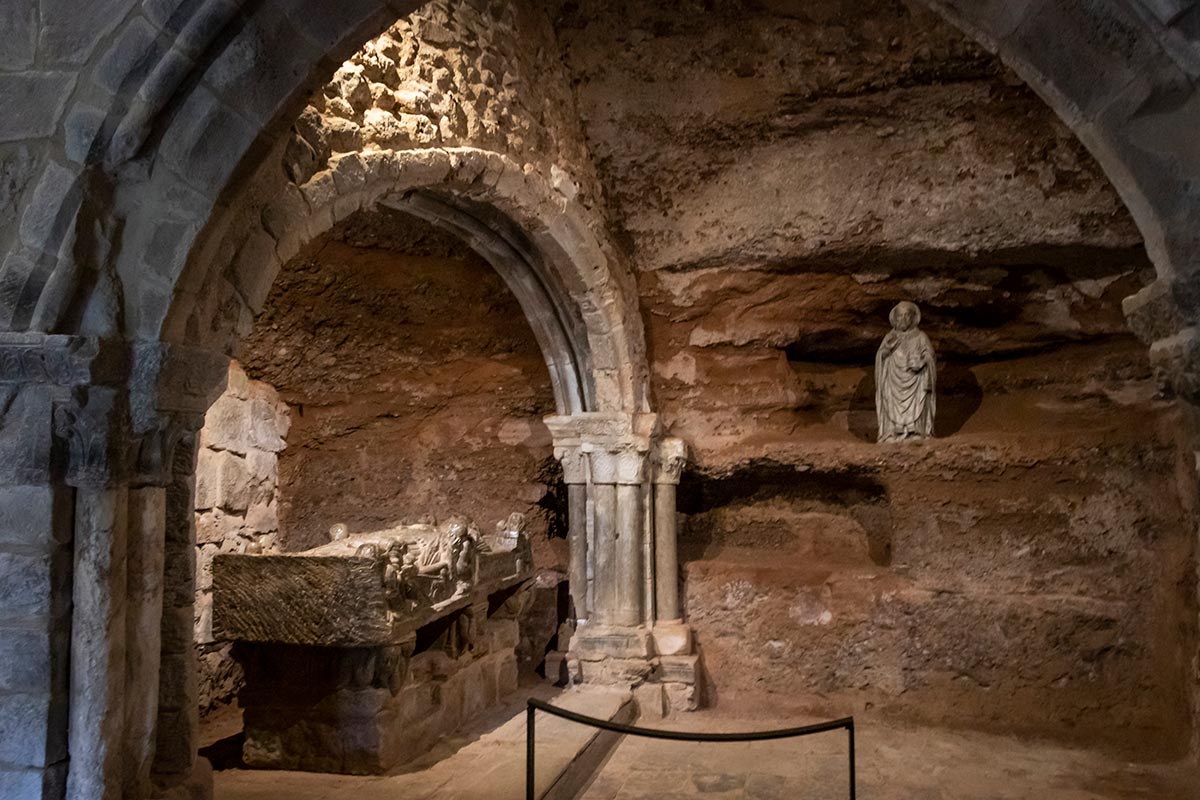 The higher Suso Monastery was built between the 6th and 11th centuries, and here are historic remains of the rock caves where the hermits lived, the Moorish archways and the Roman burial cave, where coffins and small statues still stand.

It was also in the Monastery of Suso that the Castilian language was born. Monks sat here over 1,000 years ago translating Latin scriptures. The monastery’s importance as the cradle of the Spanish language is recognised by UNESCO and reinforced by the fact that Spain’s first poet, Gonzalo de Berceo, also lived at the monastery. With an extensive library of over 10,000 books, the monastery is still of great linguistic importance. 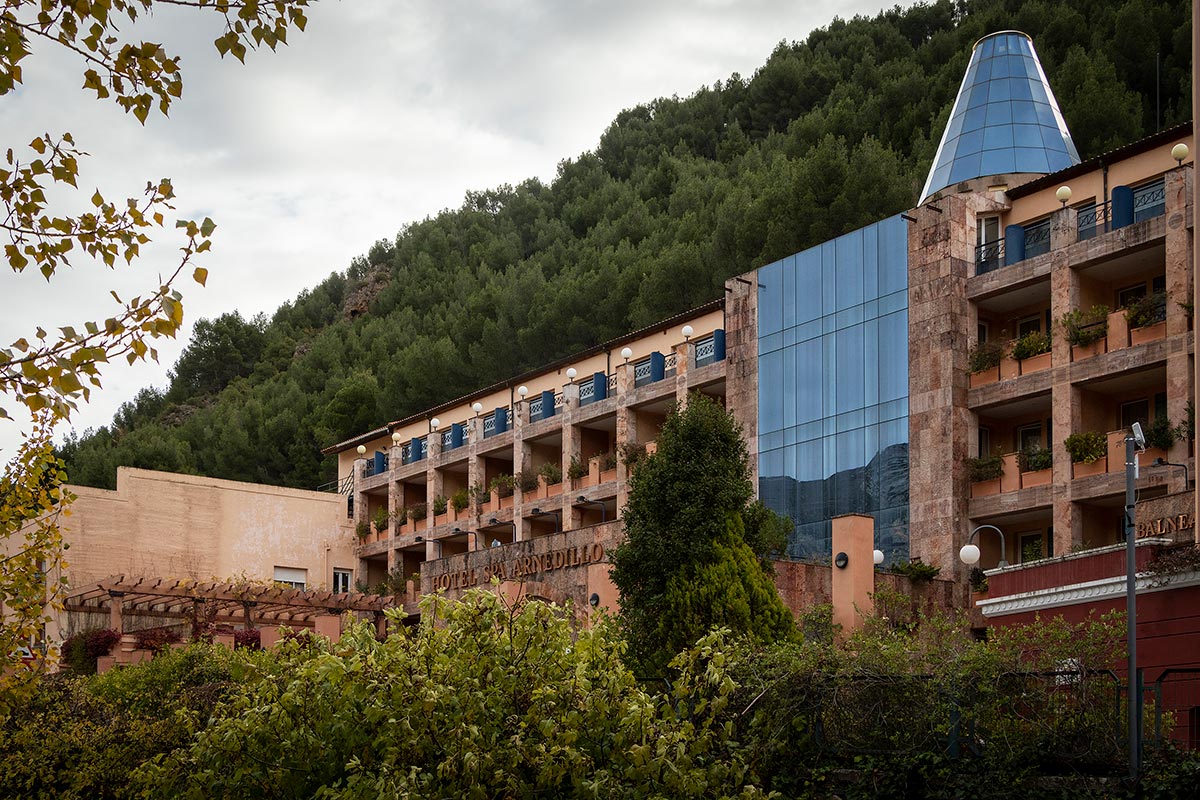 6 Wine massage at the spa hotel

At the Balneario de Arnedillo spa, no one will look at you sideways if you wander around the hotel’s communal areas in a bathrobe and terry slippers. So do all the other hotel guests. Only in the restaurant are you expected to be dressed more decently.

Located in the town of Arnedillo, on a hillside with beautiful views of the mountains, the Balneario de Arnedillo is known for its thermal water spa that flows underground and inside the pools. Since Roman times, La Rioja’s thermal waters, combined with its climate, have been known for their healing powers, which have also attracted the likes of King Fernando.

The basement offers a range of treatments from mud baths, aromatherapy and beauty treatments to wine massages. The latter is a must when visiting Spain’s most famous wine region. But you lie on a tray and have your body massaged with oil infused with red wine by a knowledgeable therapist, you are served red wine at the same time. Besides the fact that it can be a bit of a challenge to drink wine while receiving a massage, the aroma of wine provides the body with extra antioxidants. After the massage, you sit in a tub of thermal water for 20 minutes, during which you are offered more red wine. After that experience, you’re completely relaxed and sensory-saturated.