A visit to Malaga’s Soho district is a must if you love street art. Málaga’s hip artists’ quarter is packed with works by some of the world’s best street artists. And new street art by up-and-coming artists is constantly emerging here, and worth keeping an eye out for.

Southwest of Malaga’s city centre is the hip riverside district of Soho, bordered by the Alameda Principal boulevard, the Guadalmedina River and the port area with Plaza de la Marina. For many years the neighbourhood was a run-down and neglected residential area, but this was changed when the MAUS (Málaga Arte Urbano Soho) project, in collaboration with the city council, hired world-famous street artists to spruce up the neighbourhood.

Since 2013, driven by MAUS and Malaga’s Museum of Contemporary Art, CAC, the neighbourhood has been home to a wide and exciting range of street art, created by some of the world’s greatest graffiti and street artists such as UK’s D*FACE, Belgium’s ROA, US’s Obey, UK’s Ben Eine and Spain’s Dadi Dreucol. The initiative has radically changed the neighbourhood, now known simply as Barrio de Las Artes (Artists’ Quarter). In addition to serving as an outdoor art museum, plenty of creative spirits have moved into the neighborhood, creating a thriving environment. 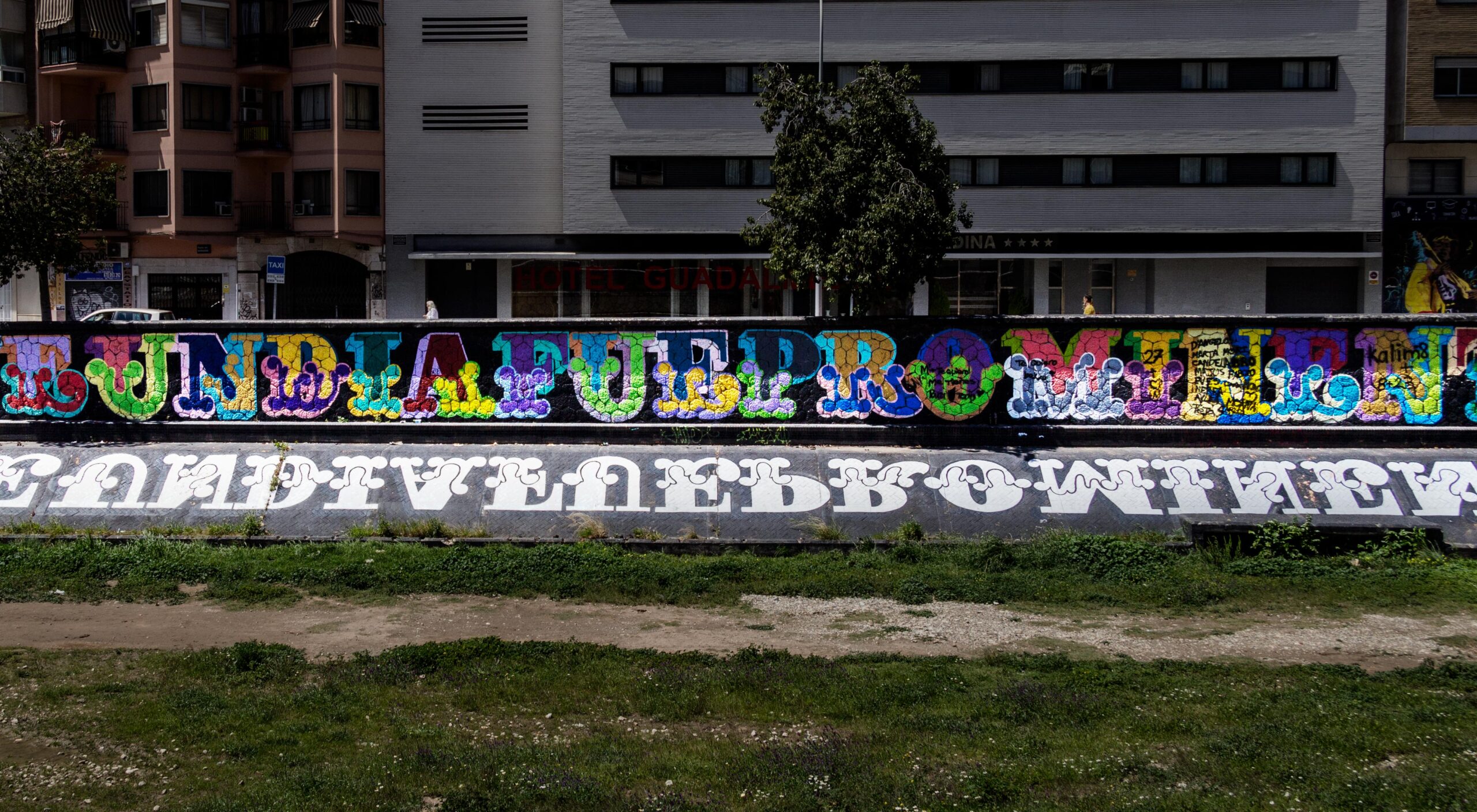 A 130-metre mural by English graphic artist Ben Eine runs along the dry riverbank to the right of the El Perchel bridge at the CAC museum.

The street art created at the initiative of MAUS also attracts many other street artists and graphic artists to the neighbourhood. And in addition to admiring the great international works, you can find plenty of street art all over the neighbourhood’s fine architectural buildings from the 19. and 20th century, in squares, bridges and along the dried-up riverbank. Styles range from graffiti, paste ups and stencils to street art inspired by classic car art.

Start the tour at the Museum of Modern Art, CAC. The museum is located by the bridge, Puente del Perchel, on the dried-up riverbank of the Guadalmedina. Continue around the neighbourhood and don’t miss the streets of Casas de Campo and Simonet, where there is a lot of street art. Remember to look up, down and around. Street art often hides in the most surprising places.

Two of the neighbourhood’s most important street art works are ‘The Pilot’ by Englishman D*Face and ‘Paz y Libertad’ (Peace and Freedom) by American multi-artist Obey. You’ll find them at Avenida del Comandante Benítez 14, just behind the CAC. 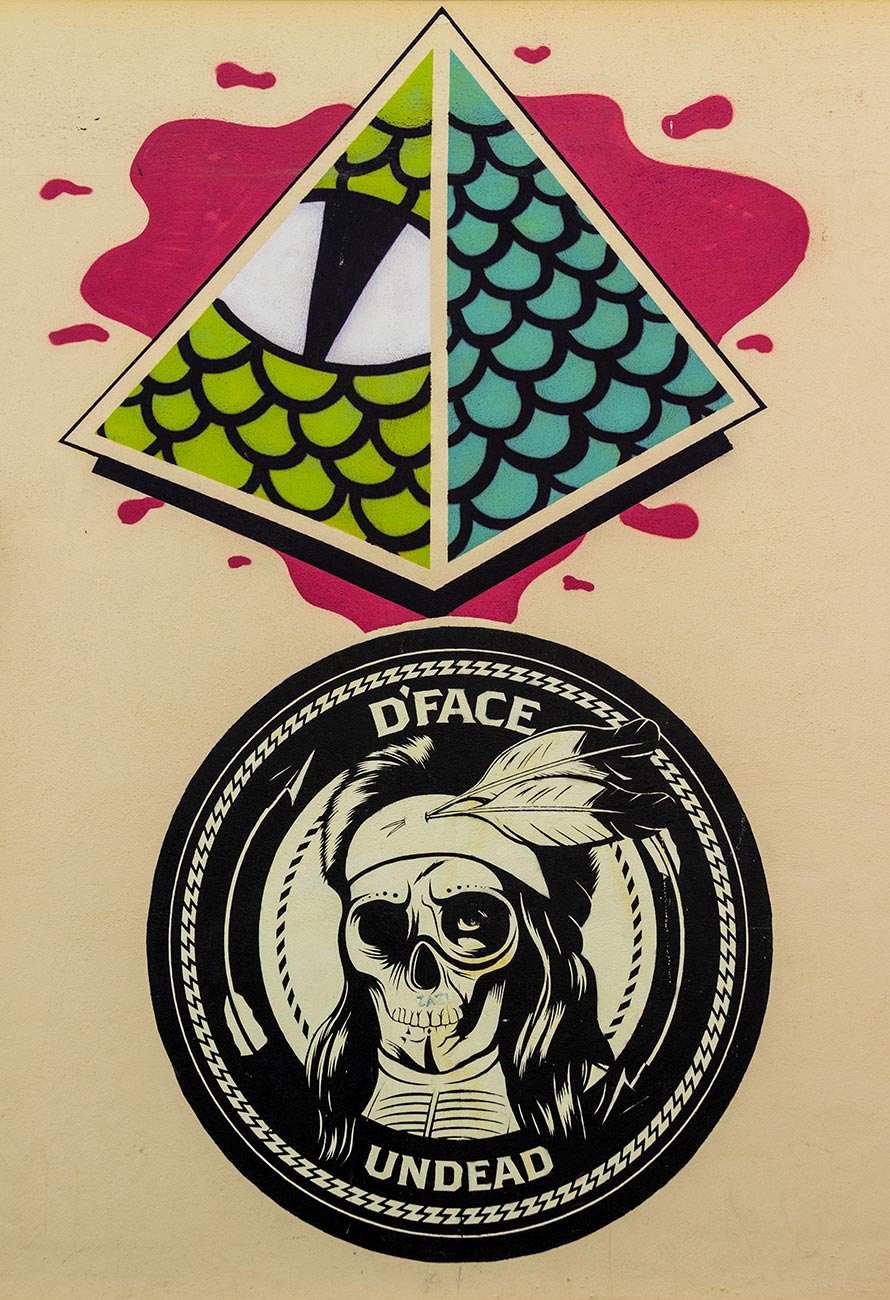 The world-famous self-taught illustrator, painter and street artist, D*FACE (Dean Stockton) has also adorned a house wall with this work in the street Casas de Campos. 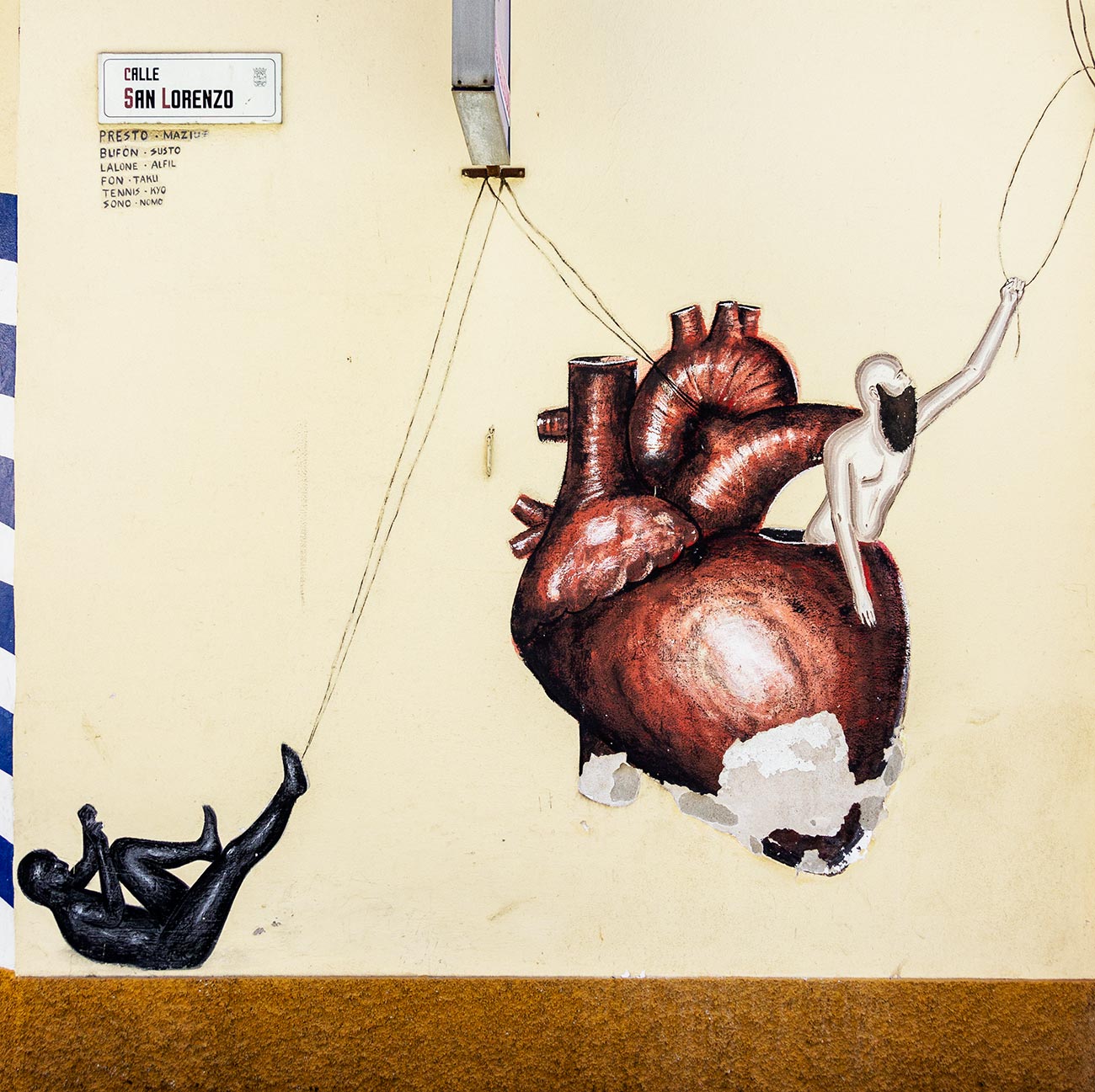 In the works of Spanish artist Dadi Dreucol, the characteristic man with a beard is a recurring theme. Dreucol reflects on human existence. Dreucol began painting at the age of 12 and graduated from the Academy of Fine Arts. This work, entitled “To fall in love”, can be seen in San Lorenzo street. 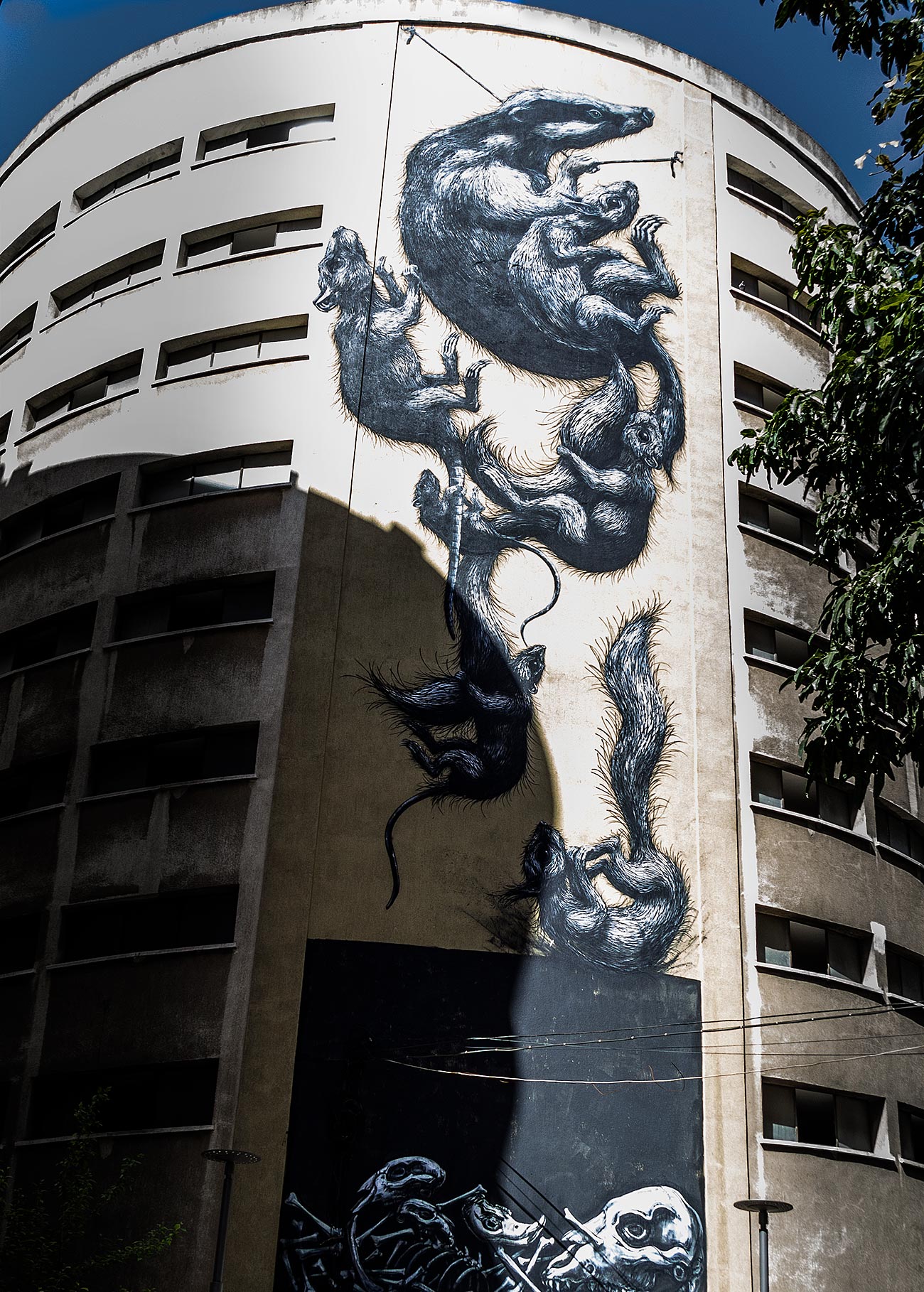 A pack of rats slides down the wall of a house and ends up dead in a black box in Belgian artist ROA’s gable painting at Casas de Campos 2. ROA also created the chameleon further up the street (the one pictured at the top of the article). 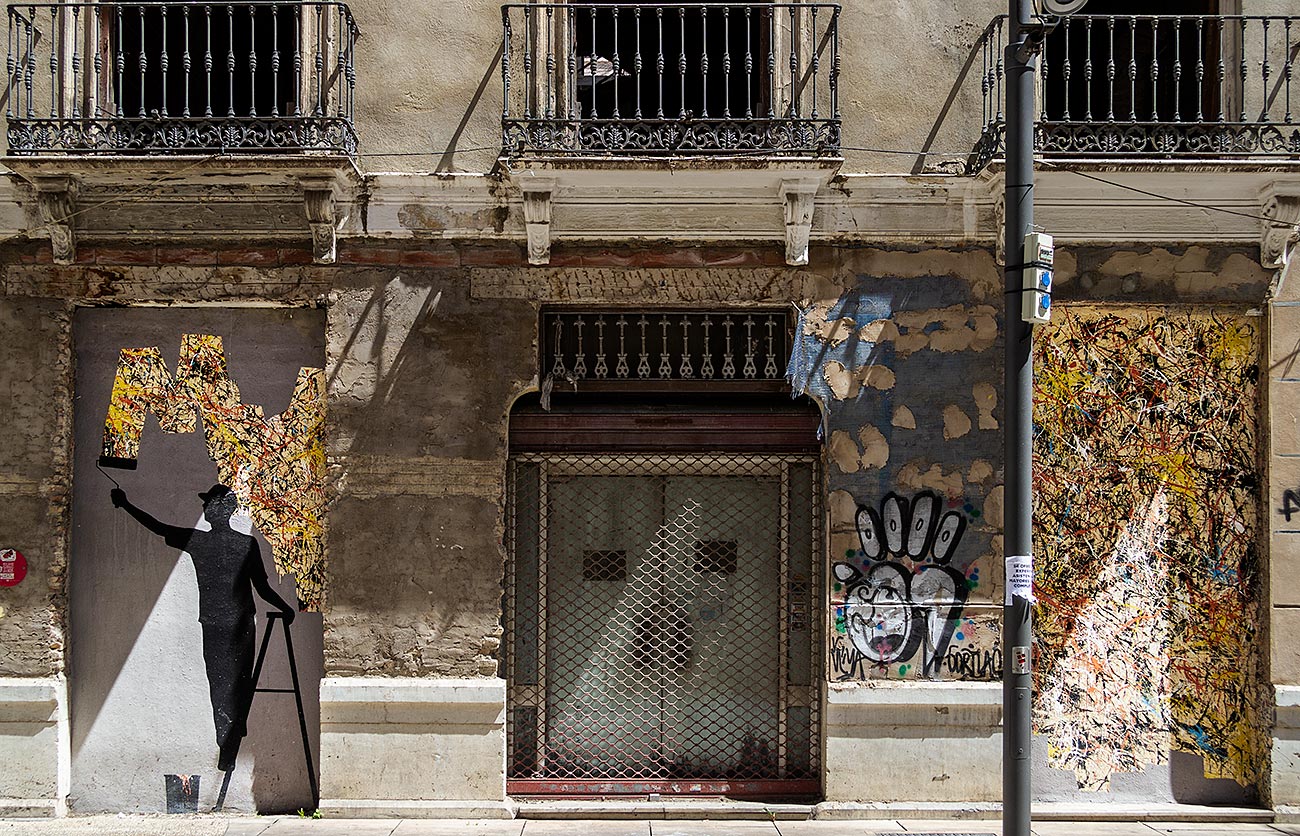 A work by Spanish artist Pejac (Silvestre Santiago) of a man painting over graffiti can be seen at 15 Tomás Heredia Street. 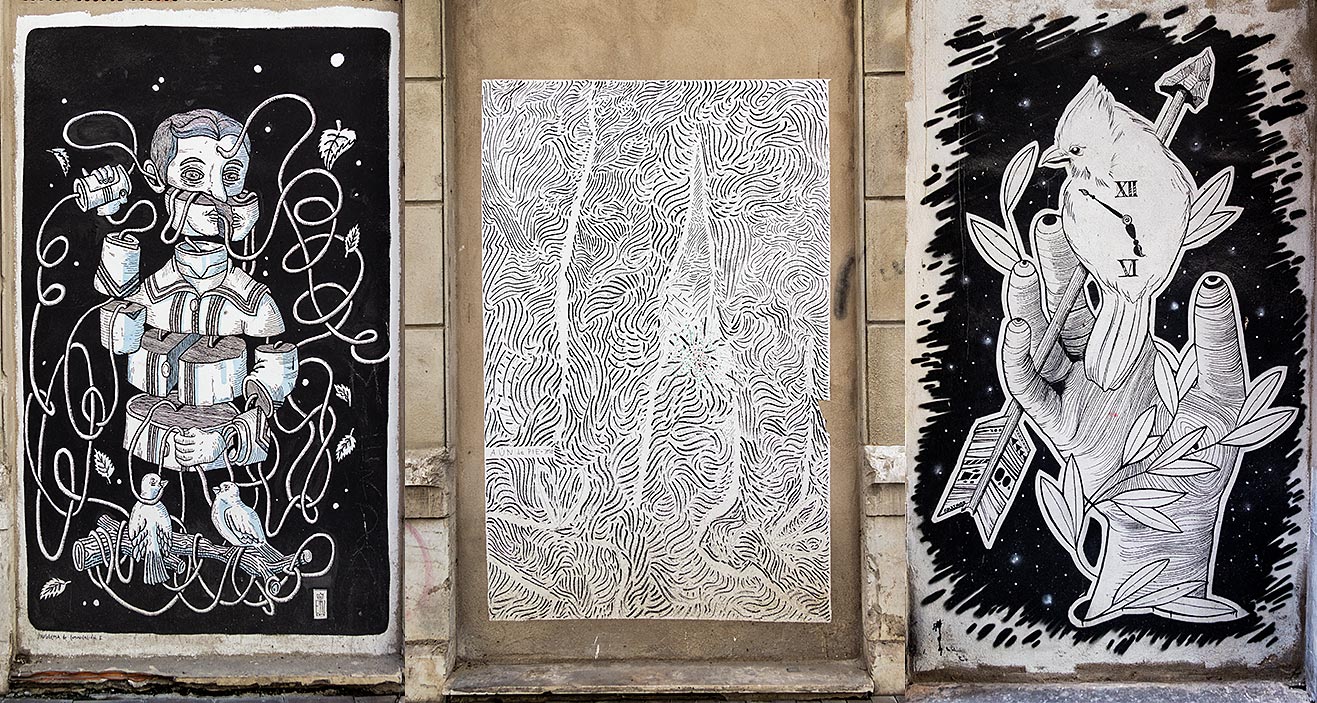 Works by Spanish artists and Rubén (th), Emmanuel Lafont (tv) and José Medina Galote in the streets of Simonet and Tomás Heredia. 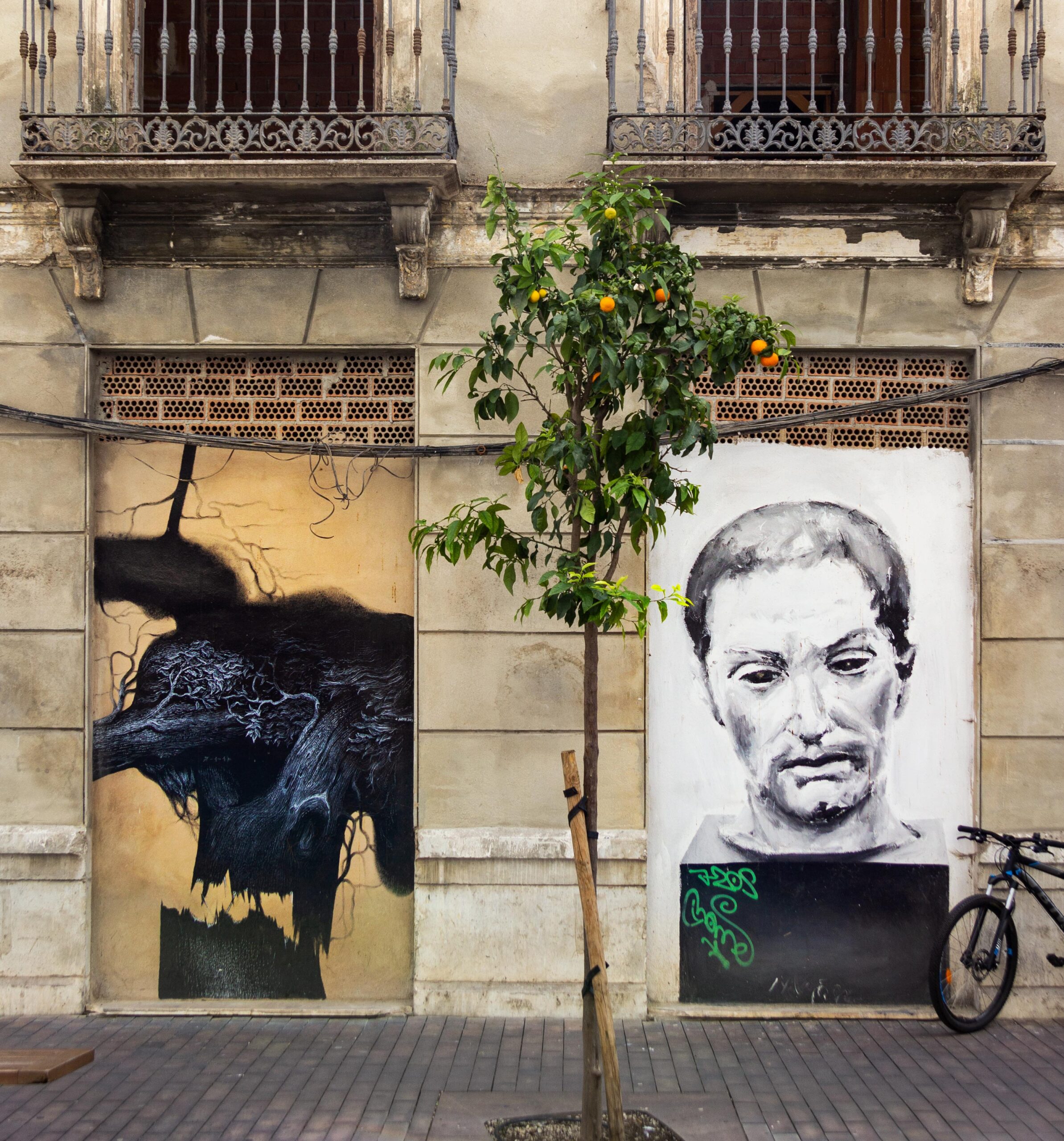 Jesús Zurita (tv) paints irrational images of emotions, and Santiago Ydáñez’s portraits have autobiographical references. The works can be seen in the street Tomas Heredia. 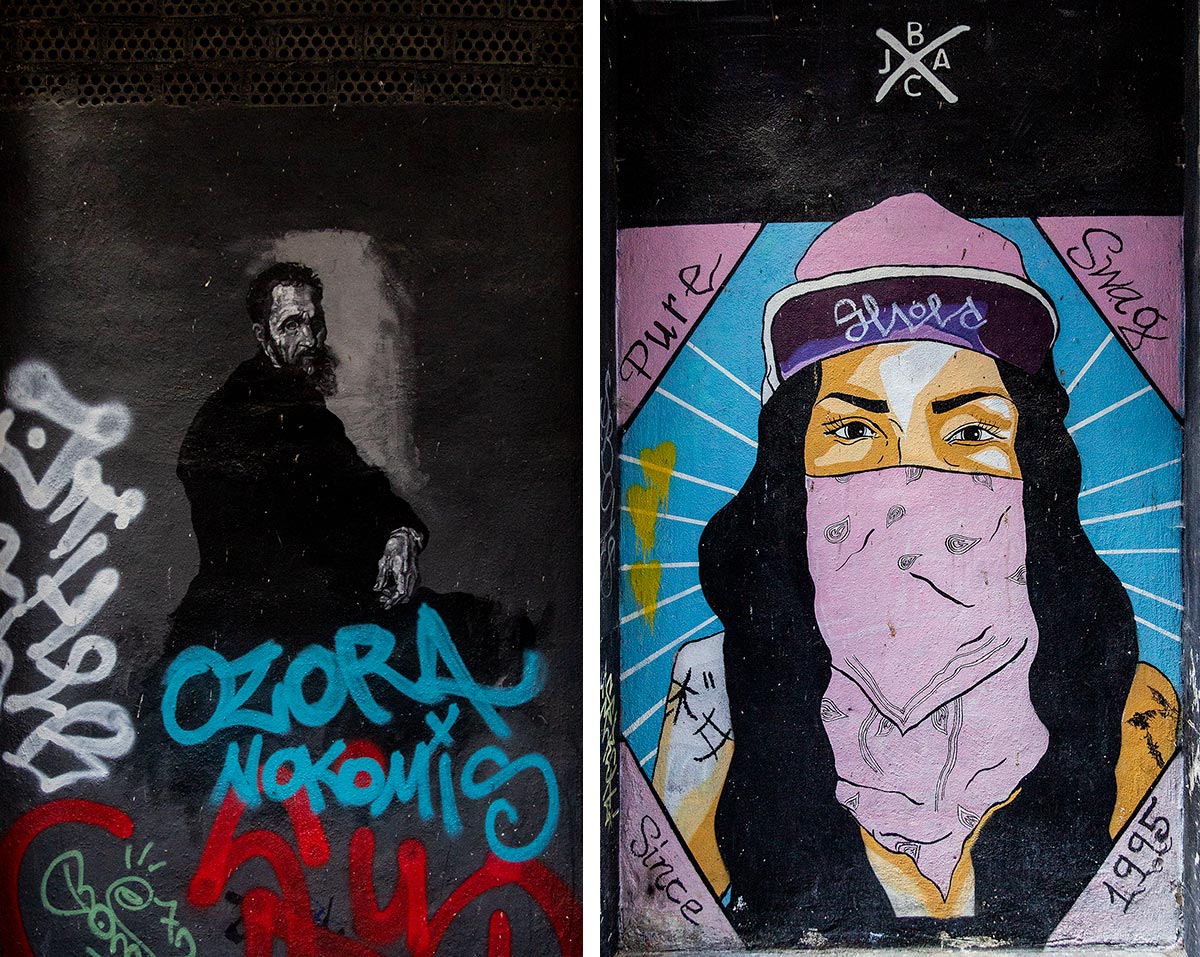 Two very different portraits – the male portrait of Zuilo (tv) and “Swag” by award-winning illustrator Jesús Azguaga side by side in Simonet street. 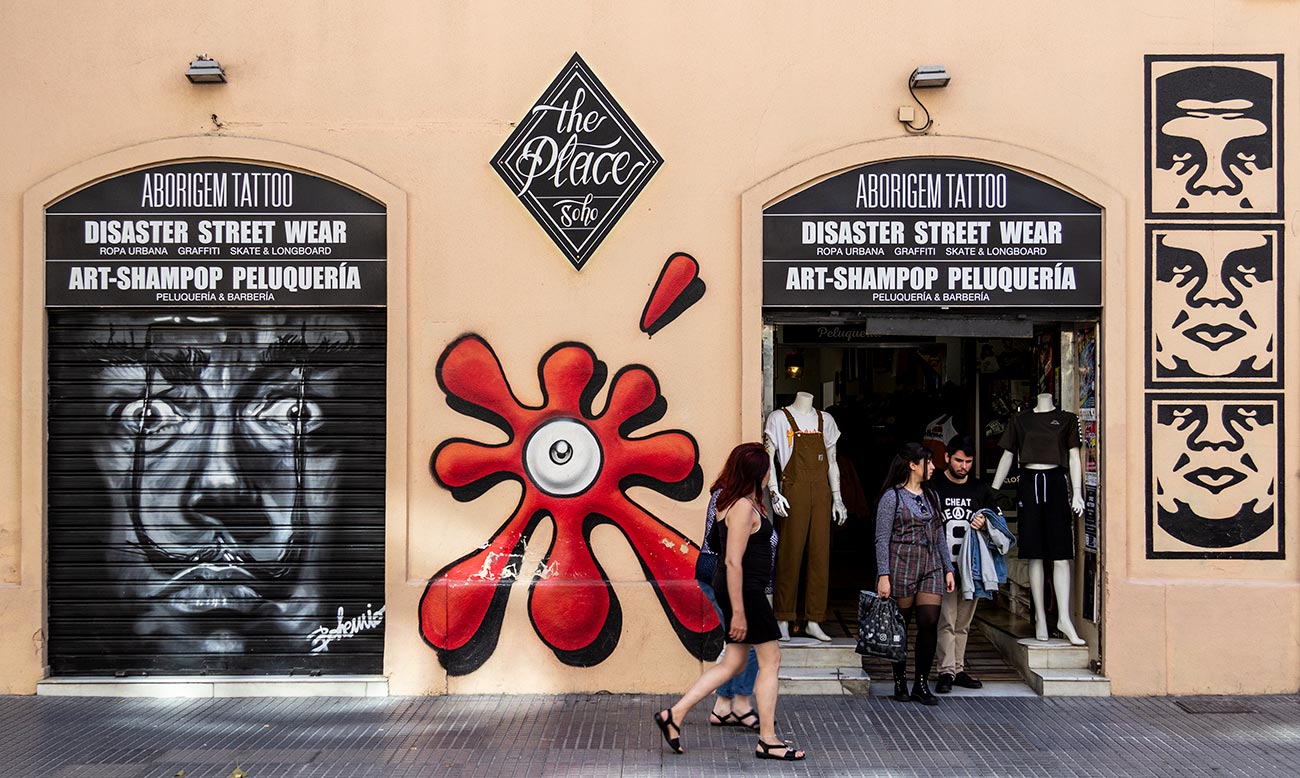 Street art also graces Soho’s storefronts, including skater shop The Place Sohoi on Córdoba Street. Works by Spain’s most famous graphic artist, SUSO33, (centre) and OBEY (th) are among those on display.

Map of street art in Soho

On the MAUS website you can download a map of the street art location in the Soho district of Málaga, as well as a description of the different artists participating in the MAUS project. Download the map here.