Learn Spanish while sightseeing in Barcelona

– Do you know the singer Manu Chao?, asks Martyna, who owns and runs the Language Surfing language school in Barcelona, and continues:
– We’ll start with a Spanish song that we can talk about, so I can get a feel for how much Spanish you know.

I’m on my first Spanish course with Language Surfing, which has a different approach to language learning. I speak some Spanish and I have been to Spanish courses in both Denmark and Spain, but my level is variable and I forget quickly because I am not permanently in Spain. However, Language Surfing is also for beginners and more language-oriented people than me.

The alternative teaching method, where I am not put in a class according to my grammar level, appeals to me, so I have decided to test the school for five days with two lessons per day.

At Language Surfing you get individual tuition and you help to create the content. Before I went to Barcelona, Matyna gave me a questionnaire about my interests and what I wanted to focus on in my teaching. I chose art, photography, music and culture as my subjects. You can also choose topics such as food, sports, architecture, fashion and nature.

Martyna is a journalist born in Poland. She has worked as a radio journalist and for the Spanish newspaper El Pais.
– Even though I speak fluent Spanish, people don’t want a blonde Spanish teacher with blue eyes. That’s why all the teachers I’ve hired are native Spaniards,” she says. However, Martyna is in charge of music lessons, as this is her speciality, and the school also has a recording studio, so you can record your own songs with her if you like.

Martyna matches you with a teacher who has the same interests as you, and my teacher for the rest of the week is Rebeca, and it turns out she’s a perfect match for me.

The song about all the good things in life

Back to my first music lesson. Martyna and I listened to Manu Chao’s song Me gustas tu, which is about all the things the singer likes in life. After I translated the text Martyna had printed out for me, we talked about the things I like to do and she tested me on my Spanish speaking skills in present, past and pre-present tense. We also talked a bit about examples of language use in poetry and song lyrics, which can be different from speaking a language. As a big music lover, I was thrilled to get new Spanish words in with music. 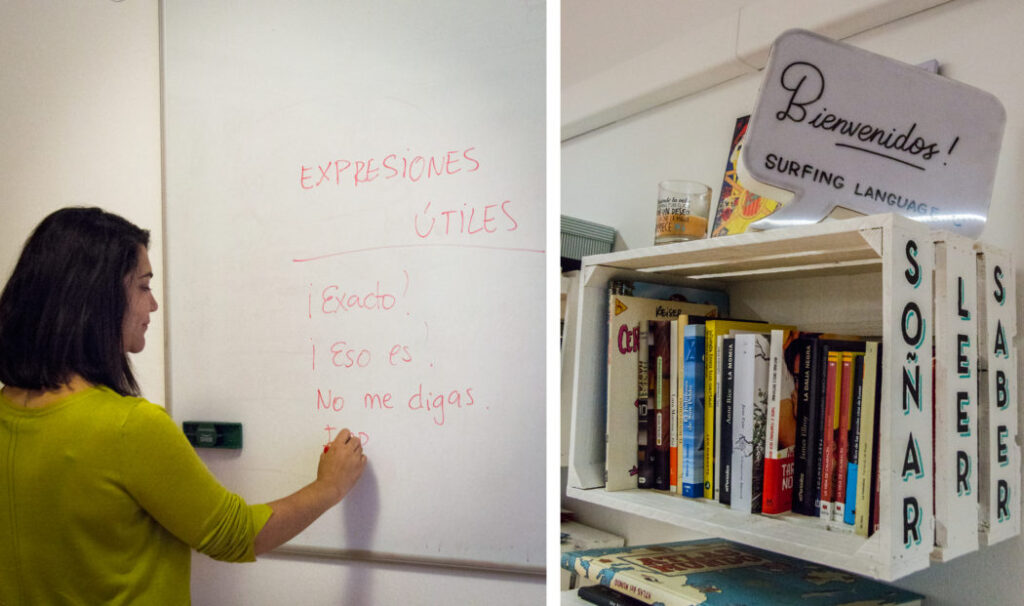 Of course, learning Spanish also means that there must be a certain amount of theory, so that grammar, among other things, can be learned.

At Langage Surfing, lessons also begin with a theory section, but without traditional textbooks. Classes are held in a small, cosy room with a blackboard and tables for just two people. The theory is typically based on the activity you are going to later in the day, focusing on reinforcing vocabulary and grammar. I was given photocopies of grammar books, which you can also work on after class.

Language Surfing has a sofa corner with shelves of Spanish educational, non-fiction and fiction books to sit and read outside of class. There are also several Spanish games and the possibility to use the internet. 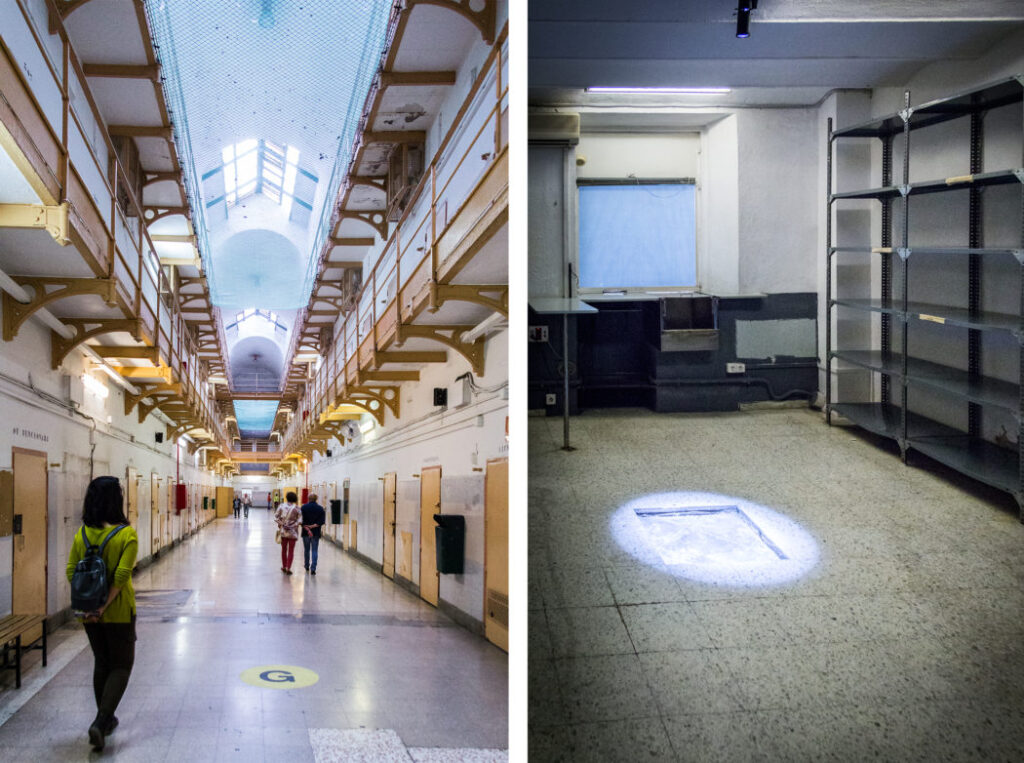 After the introductory grammar, my second day of classes (and first day with Rebeca as my teacher) was spent at the recently closed La Model prison , which is located in the same street as Language Surfing. That experience was the highlight and the one that left the deepest mark on me in my teaching career. Here became Language Surfing’s slogan: Learn Spanish while sightseeing in Barcelona was realized in a very different place with a strong history.

Rebeca introduced me to the key phrases I needed to talk about the prison visit on the way before we left.

La Model is a 113 year old prison that was emptied of its last prisoners just 3 months before my visit. For many years, the prison was the only one in Barcelona, and as a result it has held prisoners who have committed everything from petty theft to multiple murders.
That the prisoners had only recently moved out was felt as soon as we entered. The energy and atmosphere was thick in the air, and it was impossible not to be affected by it. But it also made the experience more authentic. The old, and hopelessly outdated prison sent my thoughts back to the movie Goat’s Nest.

13 of the former cells are now themed rooms, telling the stories of the prison and its most notable inmates. We also visited the courtyard, the dining room, the library (which is the smallest I’ve ever seen), and the visitors’ room. A prisoner was executed in the prison’s former post office, and the exact spot of the execution is marked by a large spotlight. The story goes that the prisoner took an unusually long time to die, and it is macabre to think that everyday life went on unabated at the post office the next day.

In prison, Rebeca and I spoke to a staff member who was both really good at English and also had in-depth knowledge of the prison. He was smart and understood that I was on a Spanish course, so he spoke Spanish to me, but when he sensed that I didn’t understand, he switched to English. As soon as I was back, he spoke Spanish again. It was a really good tactic because I became more eager to speak as much Spanish as possible and I discovered that I know more Spanish than I thought.

After the prison visit, I was given a homework assignment to read the Spanish brochure about La Model, and the next day I talked about the prison, the inmates and what I had read, seen and gained insight into the day before. 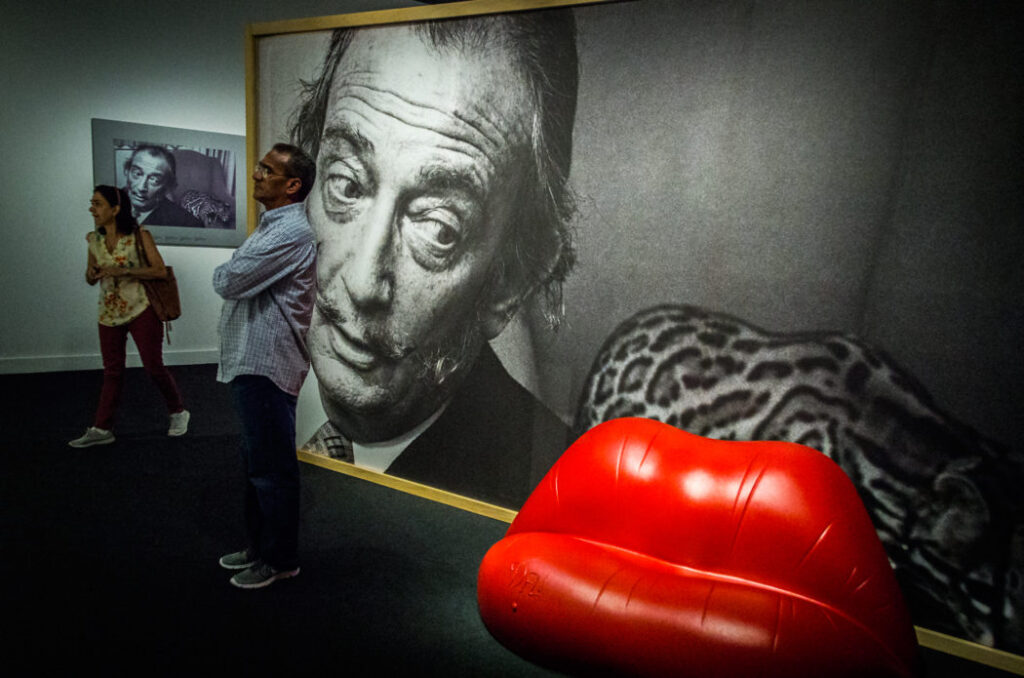 My third day at school was all about photography. Rebeca introduced me to a range of words for different moods and emotions in photography, as well as teaching me how to describe composition. Then we went to the photo exhibition on Salvador Dalí’s relationship with the press at Palau Robert.

At the exhibition, I talked about the photographs, and Rebeca and I had a chat – in Spanish, of course – about the eccentric artist’s formidable capacity for self-staging. Not least to the press. 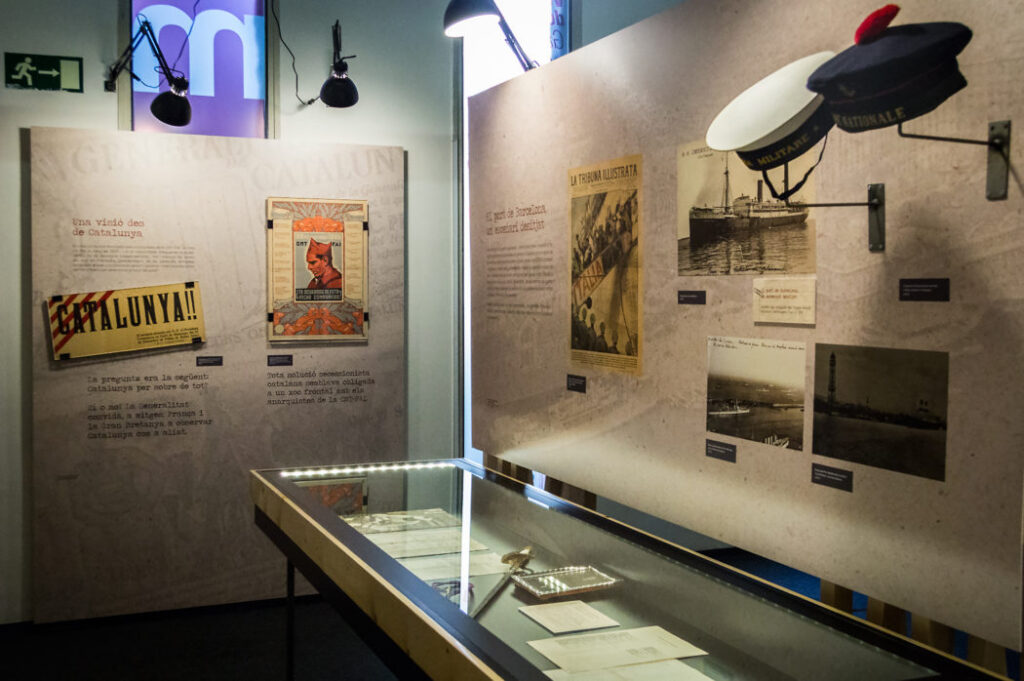 The history of Catalan democracy

My language course at Language Surfing was in the week leading up to the Catalans voting on whether they wanted to be independent from Spain. So Rebeca thought it was only natural that my cultural injection on the fourth day consisted of a museum visit to the Espai Memorial Democratic. Before that, we talked about the Catalans’ different views on independence and the reasons behind them.

The exhibition gave me insight into the history of democracy in Catalonia, including. The importance of the Spanish Civil War for Catalonia. 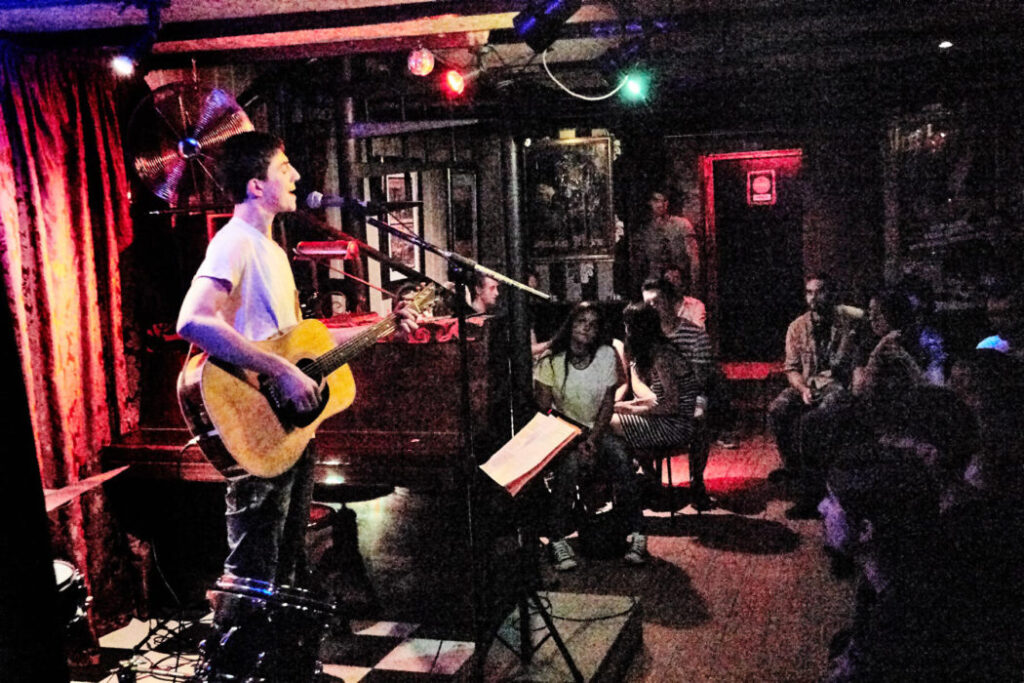 On bar with open microphone

On Thursday, my last night on the course, Martyna had invited me and other students to a local bar near the school where there was micrófono abierto (open microphone). Guests who wanted to could perform and give a taste of their musical talents.

The musical talent of the performers ranged from miserable to moderately good that night, but as the music was secondary to us, it didn’t spoil the evening. We were more interested in hearing about each other’s backgrounds and why we wanted to learn Spanish. Plenty of red wine was poured while we shared our experiences of the lessons and learned about each other’s cultures and our relationship with Spain. A great way to exchange experiences with people of all ages from different countries.

My last lessons were again dedicated to music. So – slightly influenced by yesterday’s intake of red wine – I listened, sang my way through and talked about the Spanish classic Porque te vas before I said goodbye.

The week at Language Surfing has been the most fun language course I have been on so far. The teaching method means that I have learned words and concepts that make it easier to talk more deeply about my interests that I would never encounter in traditional textbooks. The strong focus on my art interest is a huge advantage for me, as I often talk to Spanish artists. In addition, I have become better at engaging in conversations in Spanish and trusting that I will be understood.

The fact that both Martyna and Rebeca are really talented and amazingly wonderful people is an added bonus to the experience. I also think it’s a huge advantage that you get very close as a teacher and a student when you have one-to-one teaching. If, like me, you get bored quickly in a traditional classroom, I recommend you try Language Surfing.

Language Surfing offers Spanish lessons at all levels, and exams can also be arranged if you need them. The school can also help with accommodation.

Danish simplicity and elegance combined with Spanish charm in Navaluenga La Fábrica: a vibrant art mecca in the heart of Madrid